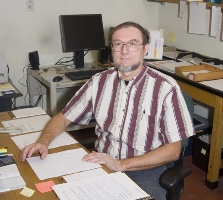 Browning reactions in various fruits, plants and vegetables are quite common and are of some concern to the food and agricultural industry. Enzymes responsible for these reactions include polyphenol oxidase (PPO) and tyrosinase. Dr. Flurkey has been examining these enzymes in a variety of plants and fungi, including broad beans and mushrooms. One goal of this research project is to monitor the enzyme activity and different forms of the enzyme during plant or fungal development. A second goal of this project deals with the isolation and characterization of PPO in order to gain more information about its enzymatic and structural properties. This project has also focused on differentiating PPO from two other enzymes, laccase and peroxidase, which can also cause browning-like reactions. This includes differentiating latent and active PPO enzyme forms and examining how latent forms are converted into active forms. Methods using high resolution isoelectric focusing and two-dimensional electrophoresis are being developed to monitor latent and active forms during development and the conversion of latent to active enzyme forms. Collaborations with Dr. J. Inlow are using a bioinformatics approach to understand and compare structural features of tyrosinase in plants and fungi. All of these studies will lead to a better understanding of PPO and tyrosinase and may lead to better approaches in controlling browning reactions in fruits and vegetables.

6. Flurkey, W.H. Use of solid phase extraction in the biochemistry laboratory to separate different lipids. Biochemistry and Molecular Biology Education 33:357-360, 2005.

8. Rescigno, A., Zucca, P., Flurkey, A., Inlow, J., and Flurkey, W.H. Identification and discrimination between some contaminant enzyme activities in commercial preparations of mushroom tyrosinase. Enzyme and Microbial Technology 41:620-627, 2007.