'Lead in my bones': Living a contaminated life in East Chicago

"Are you concerned about your water?"

It's not a question that 13- and 14-year-old kids would typically ponder. But when Denise Abdul-Rahman asks the question to a group of middle school students, hands shoot up.

And for good reason. This isn't just any school in just any city. It's the Urban Enterprise Academy in East Chicago — a school located across the street from an EPA Superfund site.

Abdul-Rahman, the Environmental Justice Chair of the Indiana NAACP, asks the question as part of the inaugural "Our Youth Scientists" training program, organized by the Indiana NAACP. The idea was spurred by frustration about what the Indiana NAACP calls mismanagement of the local lead contamination. Abdul-Rahman says it will be an ongoing initiative to train children located in contaminated areas to test their air, soil and water for lead.

"It's extremely important that these youth learn the legacy of the lead in the community that they live in," Abdul-Rahman said. "They have the right to feel safe, and that we're giving them tools to help them to know their own living space and environment."

East Chicago's industrial legacy began at the turn of the 20th century, when Inland Steel built a plant in the city's harbor. It was one of many companies to take advantage of the city's proximity to Lake Michigan and the Calumet River, and of the railroads that still dissect the city.

U.S. Smelter and Lead Refinery, Inc. was one of those companies, and for nearly 80 years, it operated on the land that now makes up the 79-acre USS Lead Superfund Site.

In that time, the company performed a variety of industrial processing tasks. In particular, it operated as a lead smelter. In the early days, the plant processed ore, but in the 1970s, it began recovering lead from old automobile batteries and scrap metal. Waste from the plant's operation was dealt with in a variety of ways. Solid waste was pushed once a year into nearby wetlands, and for at least a decade, USS Lead discharged furnace cooling water and storm water runoff into the Great Calumet River, dumping amounts of lead, cadmium, copper, arsenic and zinc that exceeded what was  permitted.

In the meantime, construction of the nearby West Calumet Housing Complex was completed in the early 1970s. And although state and federal agencies were aware of high levels of heavy metals in the area — and despite the fact that it had been nominated for the Environmental Protection Agency's National Priorities List once before, in 1992 — it wasn't until 2009 that it was finally added to the NPL and designated a a Superfund site.

"I didn't know we lived on top of a lead refinery," says Akeeshea Daniels. She is one of the residents who had to relocate after East Chicago's mayor ordered the evacuation of the complex last year. Test results showed a lead level of 32,000 parts per million inside her home. The EPA considers anything above 700 ppm to be dangerous.

Health problems for Daniels started to surface in the late 2000s. Her sons were experiencing repeated and unrelenting cases of strep throat, to the point that it escalated to scarlet fever. (Lead and other contaminants have been shown to affect immune functions.) Attributing some of the issues to mold in her bathtub, she eventually got the tub replaced. That's when she found out that there was no barrier between the tub and the dirt below.

"The same contaminated soil that was outside," Daniels says. "My tub was sitting in dirt."

Daniels lived in that home for about a decade before the mayor ordered the evacuation. In that time, two of her sons, now  13 and 19, racked up nearly 1,000 pages of medical records. Her youngest son, Xavier, was less than a month old when Daniels moved to the West Calumet Housing Complex. He suffers from asthma, allergies and ADHD, which Daniels attributes to the contamination of their unit.

Daniels, 41, has had more than her fair share of health problems, as well. Three years ago, she had surgery to have her tonsils out — an unusual procedure for someone in their late 30s. She suffers from rheumatoid arthritis. And she has lead in her bones.

From lead testing to STEM

At Urban Enterprise, Naomi Casares is one of the students learning how to test her environment for lead. She signed a letter earlier this year urging President Donald Trump not to cut funding for STEM (science, technology, engineering and math) programming. She was excited to get some hands-on experience with testing. She lives on Zone 2 of the Superfund site, and was happy to say that her tests came back negative.

Daniels also attended this past week's "Our Youth Scientists"  training program with her youngest son, a student at Urban Enterprise Academy. A lanky 13-year-old who is tall for his age, Xavier sat with his classmates, learning to test for lead in the air.

"I'm glad they're doing something that will make him get more active with his classmates," Daniels said.

That was also on the mind of Dee Etta Wright, principal of Joseph L. Block Middle School, where training also took place earlier that morning.

"I think this is very important because 49 percent of our kids are African-American, 49 percent are Hispanic," Wright said. "And as we all know, those minorities are underrepresented in some of the science fields, so we're hoping that this will spark interest in our students to maybe become interested in science careers."

Wright's school is located about 2 miles northeast of the Superfund site. She says that her students felt the impact of the closure of the West Calumet Housing Complex. Some of the kids had been attending Block Middle School when the complex was evacuated.

"Most of the kids who were living in the housing complex, they either relocated to Hammond, Merrillville or Gary," she said. A few students stayed in the school, "but not many. We lost those kids."

The soil, water and dust samples tested at the training were supplied by the students themselves. Of the samples tested, most did not show any lead contamination, but two tested in the 300-500 ppm range — meaning food grown in that soil would be unfit to eat. Worse, at least one sample tested above 700 ppm, which makes the soil unfit to play in. Other samples were later taken back to Indiana State University, which is providing free testing.

Just a few blocks away from the schools, in what is called Zone 2 of the Superfund site, a handful of yards sit cordoned off with yellow plastic fencing. Inside, where bright green lawns once sat lie pits dug 2 feet deep by EPA contractors. They've been working yard by yard to remove the contaminated dirt and replace it with new soil. They're hoping to get the excavations done before frost sets in and the ground hardens.

State Sen. Lonnie Randolph, D-East Chicago, who joined the kids for the morning training, grew up in the area and says this issue hits close to home, literally. Randolph said he played in Zone 1, lived in Zone 2 and his parents lived in Zone 3.

"The main thing is to get some recognition," Randolph said, "make people aware of what's going on so we can get some help." 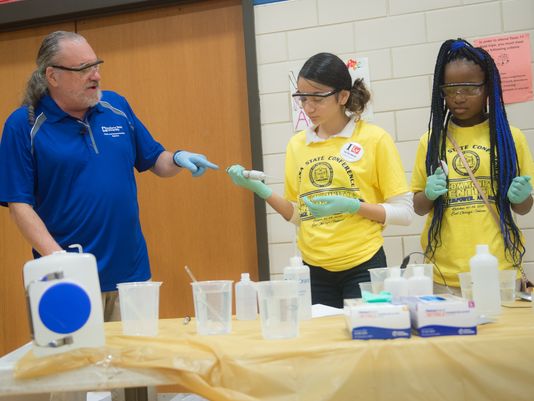