The current interns at Goldman Sachs are an especially lucky bunch: They’re catching CEO Lloyd Blankfein after his announcement that he plans to step down but before he officially hands the reins to his successor. He’s in a mood to be parental, to pontificate, and to give specific pointers.

That’s what he did in a recent talk with this year’s summer interns, in a session called “Lessons from Lloyd,” an annual tradition at the firm. Assuming a dad-like posture, Blankfein answered questions posed by Sheila Patel, who runs the firm’s international asset-management business. Part of that conversation is posted online in a video that contains some highly tweetable quotes, like, “Everything changes, not as much as people think when change is happening, but it’s always changing.” (At the very least, it forces you to rethink the changing of the guard at Goldman.)

He also gave the interns some specific advice on how to get the most out of their internship and find success in general.

Notably, the one-time lawyer spoke of the value of a liberal arts education, which he says often gets overlooked. Blankfein cautioned against being too narrow in your interests and only “looking at the likelihood of success in your business life.” He said:

So you could be a very successful person and very narrow, but you’d better be very, very, very, very good at the narrow area, because in order to be good, people have to have confidence in you, you have to engage, you have to work in teams. Everybody needs other people.”

Contrary to popular perception, he said, you don’t need a business degree to work at Goldman. But he was quick to add a “not that there’s anything wrong with that.”

Relatedly, Patel noted for her audience that Blankfein is a student of history and encouraged him to elaborate on why that is. He responded:

“[T]here are cycles to things. I can’t live in the current period without analogizing it into a different one, maybe one that I lived in earlier or that someone else lived in earlier.

You can learn from history. You shouldn’t learn too much, because there’s some deviation from it, but you have the reassurance that most of what has happened, the equivalent of it has happened before, the world continues to turn. … [And that’s] informative because it kind of tells you how to behave. “

This is especially important in difficult times, when people are paying close attention to how you perform, he added.

On making the most of their internship

A few of Blankfein’s tips were tailored to interns or anyone starting a new job. “You’re here to learn, you’re here to experience what it’s like,” he said, urging the interns to be looking at more senior people in the company and asking themselves, “Is that something I would like to emulate?”

If you have no interest in the work, or the deals you read about in the paper, he said, you may as well find a job where “you really like the stuff.”

Bear in mind, he suggested, that your job doesn’t have to be your sole passion, and you should know that the lifestyle gets better. You get to be faster at reading presentations, for example, so you’re not—to use the Karate Kid analogy he alludes to—painting fences for your whole career.

In the short term, he suggested that interns learn to pay keen attention to the details, understanding that a typo signals a lack of care, but also to step back and evaluate what’s actually happening at the firm and with clients. Ask, “What are these people trying to do?” Then learn to think critically about whether it’s working. Said Blankfein:

Blankfein also said he’s looking forward to “unrestrained tweeting,” meaning we can all expect more axioms from one of history’s most admired (and vilified) Wall Street leaders. 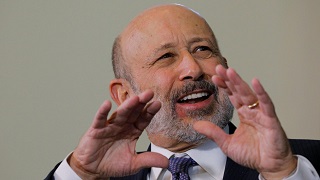