Wittenmyer lead her students through a series of physical stretches, breathing exercises and vocal warm ups.

The students sang a few silly songs, aimed at helping them relax and put their guard down. One song included the lyrics "Super Duper Double Bubble Gum," with the musical purpose of improving articulation.

Occasionally, Wittenmyer would tell a student to sit up straight.

Another time, she praised them. "The sound you gave me is what I'm looking for."

After a five-year hiatus, choir is back at West Vigo High School, and first-year teacher Wittenmyer couldn't be more pleased with re-starting the program.

"What a unique opportunity for me to build a program and truly make it my own," said Wittenmyer, who graduated in May from Indiana State University with a degree in music education.

While there's much laughter in her class, the students take what they're doing seriously — as does their teacher.

Sophomore Sadie Herring is among the students in Wittenmyer's first-period choir class.

Wittenmyer "is a lot of fun. I think she's perfect for bringing back the choir and getting kids interested," Herring said.

Wittenmyer, a 2015 Terre Haute South Vigo High School graduate, was hired in May as the new West Vigo choir director. About 35 students are enrolled in her two choir classes.

She plans on one choir for performances as she begins to build the program, but the hope is to have two to three choirs in coming years, including an auditioned choir.

Paul Ellison, Wittenmyer's own high school choir director, had a major influence on her wanting to pursue a career in music, but she did not initially have her sights set on teaching. She was majoring in music business.

"I didn't want to teach at all when I first started at ISU," she said. But then, her sophomore year, she attended an IMEA [Indiana Music Education Association] conference that involved a collegiate choir ensemble. It enabled college students from across Indiana to participate and work together.

"Our director had such passion and energy ... everything about him made me want to be like him for students" of her own. "That next week, I changed my major to music education," she said.

When she started looking for a job, she learned from Ellison about the opening at West Vigo.

And Aug. 6, she started a new musical era at the school. She plans on a fall, winter, and spring concert for the 2019-20 school year. Wittenmyer also spends part of her day assisting with the middle school program.

Among them is Junior Conner Mackey. "I've always been a choir kid. I really enjoy it. People have always said I have a really good voice, but I need to refine it. This is the opportunity I've been looking for," he said.

He said he's learned a lot in the short time he's worked with Wittenmyer.

"It's awesome. I think it's crazy that we haven't had choir for five years," she said.

She sang in choir for three years in middle school. 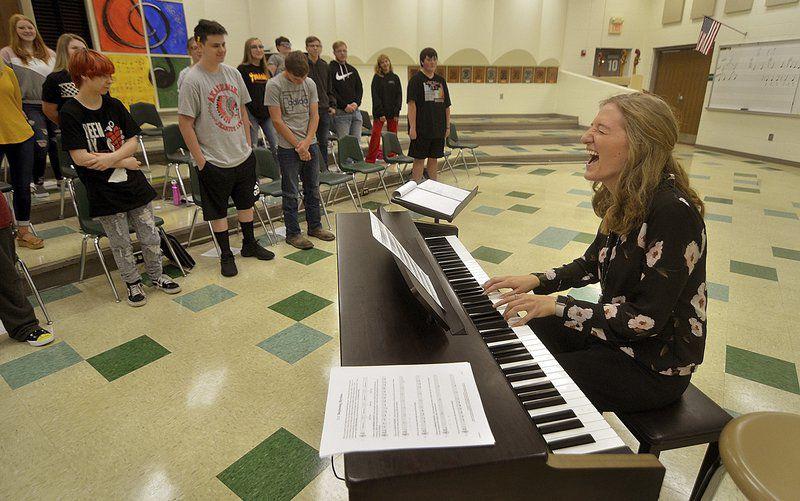