Hunefeld retired from the Southwest Dubois County School Corporation in 2001. He worked for 41 years as a high school teacher, first at Holland High School, then at Southridge High School. He still serves as a substitute teacher at the Southridge high and middle schools. He has a bachelor’s and master’s degree from Indiana State University.He is a member and past president of the Huntingburg Optimist Club and a member of the Holland Kiwanis Club, the Dubois County Community Corrections Advisory Board, the Dubois County Community Foundation and the Dubois County and Indiana State Teachers Association.Hunefeld was recruited to run for the county council seat in 1973 by a politically-active teacher friend. Despite not knowing a lot about county council work when he got started, Hunefeld is glad that he got involved. Along with working with managing the county’s budget, council members handle all kinds of activities pertaining to the county’s revenues, expenses and other numerous financial decisions.When Jerry Hunefeld joined the Dubois County Council in 1974, he had no idea what the job entailed or how much it would change over the decades.“I didn’t know at the time what all the county council was involved with,” he said. “But at that time, it was much simpler than it is today.”Now, 45 years later, Hunefeld, 81, is still serving on the council. He has been president for the last 2 ½ years; prior to that, he had been vice president for eight years.He was recently recognized by peers across the state for his service.Hunefeld has been named the Association of Indiana Counties’ 2019 Outstanding County Council Member. He received the award during the association’s annual conference, which was held earlier this month in French Lick. The award recognizes Hunefeld’s contributions made to county government throughout his years of public service, an AIC spokeswoman said in a press release.

He still enjoys serving in the position.“I feel like I still have something to offer,” he said. “ I have some significant background now, because of all of the years I’ve been involved. I feel like I can continue to make contributions and be a part of moving things forward.”Fellow Councilman Mike Kluesner, who nominated Hunefeld for the award, agreed. “Jerry has many great leadership attributes,” Kluesner wrote. “Not only is he a great listener, but he’s humble, kind and definitely a ‘philosopher and voice of reason.’”Hunefeld and his wife, Jane, have two adult children, five grandchildren and three great-grandchildren. 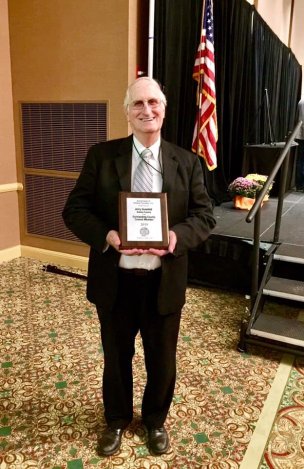