The EFT-60 is an  Anasazi upgraded Varian EM-360 permanent magnet NMR spectrometer.  The magnet is a 1.4 Tesla permanent magnet and operates at a nominal proton frequency of 60 MHz.  The EFT-60 is a fourier transform instrument and is capable of basic one and two-dimensional experiments, including proton, carbon-13, DEPT, COSY, and HETCOR.  The probe is also broadbanded, allowing observation of phophorus-31 and other nuclei.  The processing software used with the instrument is NUTS, a multiple format processing package.  The EFT-60 is managed by Dr. Rick Fitch. 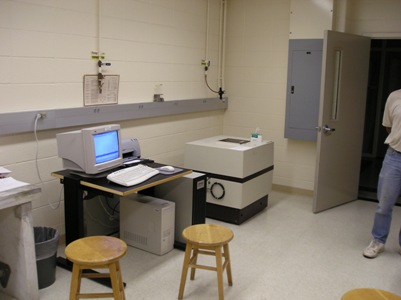 The EFT-60 is used primarily for sophomore organic (CHEM 351L/352L) and has the convenience of being a permanent magnet (thus not requiring locking), such that students can insert their samples and obtain 1H or 13C spectra with a few keystrokes in around two minutes (for 13C, this is only possible with nearly neat samples).  This is a significant benefit for large section organic labs.  The EFT-60 is housed in room S-052.  The department also houses a new Bruker Avance II 400 MHz spectrometer.