Students interested in participating in one of the projects described below should talk to the faculty investigator.

Theoretical Nuclear Physics.
I am interested in strongly-interacting regimes where traditional techniques of particle and nuclear physics cannot be applied. One such situation occurs when nuclear matter is brought to extremely high temperatures of about a trillion degrees and nuclei "melt." This creates a new state of matter known as the quark-gluon plasma (QGP). Experimentally, this phase is created in particle accelerators that collide heavy ions such as gold or uranium. To study the conditions that cause nuclei to melt, as well as the properties of the QGP, I use an extra-dimensional model inspired by string theory (known by various names including AdS/CFT, AdS/QCD, and holographic QCD). Surprisingly, working in 5 dimensions makes the math easier! I also use computational techniques to analyze the outcomes of this model. If you are interested in learning more about nuclear physics, please email me or visit me in my office.

For more information about Dr. Bartz's research and publications, please visit his webpage.

Solid State Physics.
The dynamics of the electronic to vibrational energy transfer process in CsCl crystals with CN- and F-center defect pairs is the primary system of interest. Experimentally, this system is studied with a laser and a spectrometer to obtain Raman spectra. Plans for the immediate future include the use of a femto-second pulsed laser system in order to obtain Time-Resolved Raman spectra. Dr. West is also involved in theoretical quantum mechanical interpretation of the experimental results. 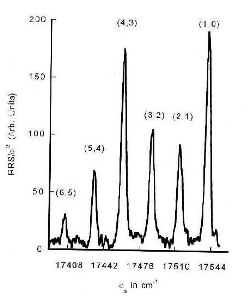 Some other topics that students have worked on, or are on the list to choose from, include: orbital dynamics of a point mass in the plane of a massive thin ring, orbital dynamics of a point mass in a plane perpendicular to the plane of a massive thin ring, a new release mechanism for trebuchets, the effects of the variation of the force of gravity with altitude near the surface of the Earth on an ideal Atwood's machine, the distribution pattern of aimed shots from archers, least time radii for point-to-point motion of a simple pendulum, the dynamics of vortex rings (smoke rings, 20 cm in diameter), the dynamics of ArrowCopters (a fun toy), special relativity in rotating reference frames, two-dimensional dipole-dipole repulsion under the influence of an external electric field, Fresnel focusing of waves in water, and promising project that a student might suggest.

For more information about Dr. West's research and publications, please visit his webpage.

Hartree-Fock dynamical electron-correlation effects in C60 after laser excitation.
In the static Hartree-Fock limit, the on-site electron-electron interaction has no effect on the electronic properties of e. But upon the laser excitation, the dynamical correlation effect appears. The time-dependent Hartree-Fock simulation through the Hubbard model shows that such an effect originates from the charge fluctuation, and an increase in the on-site electron-electron interaction suppresses the charge fluctuation and reduces the absorbed energy and the bond structure distortion. 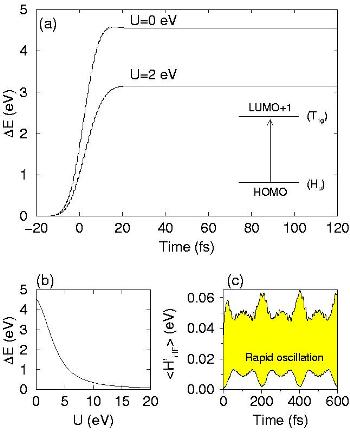 For more information about Dr. Zhang's research and publications, please visit his website.