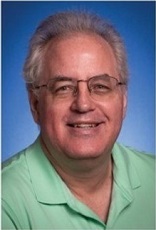 Solid State Physics
The dynamics of the electronic to vibrational energy transfer process in CsCl crystals with CN- and F-center defect pairs is the primary system of interest. Experimentally, this system is studied with a laser and a spectrometer to obtain Raman spectra. Plans for the immediate future include the use of a femto-second pulsed laser system in order to obtain Time-Resolved Raman spectra. Dr. West is also involved in theoretical quantum mechanical interpretation of the experimental results.

Fun Stuff (Suitable for undergraduates)
Dr. West has always had an interest in research projects that can actively involve students in all aspects of the project. Some of the topics that students have worked on, or are on the list to choose from, include: orbital dynamics of a point mass in the plane of a massive thin ring, orbital dynamics of a point mass in a plane perpendicular to the plane of a massive thin ring, a new release mechanism for trebuchets, the effects of the variation of the force of gravity with altitude near the surface of the Earth on an ideal Atwood's machine, the distribution pattern of aimed shots from archers, least time radii for point-to-point motion of a simple pendulum, the dynamics of vortex rings (smoke rings, 20 cm in diameter), the dynamics of ArrowCopters (a fun toy), special relativity in rotating reference frames, two-dimensional dipole-dipole repulsion under the influence of an external electric field, Fresnel focusing of waves in water, and promising project that a student might suggest.