Susan Tingley, development director for the Vigo County Historical Society & Museum, said she expects the new Vigo County History Center being built at 929 Wabash Ave., the former Glidden Furniture location, to open its doors later this year. The Duke Energy exhibit unveiled Thursday will be moved there this summer.

“When Duke Energy gave us a $45,000 grant [in late 2015], we started talking about ways that we could teach visitors about the history of electricity in a fun, interactive display,” Tingley told a room full of spectators, including ISU President Deborah Curtis.

“We also wanted to honor the men and women who worked at the local Wabash River Generating Station. That was there [in northern Vigo County] for over 60 years before it was decommissioned in 2016.”

Soon after the grant was presented, a partnership between the Vigo County Historical Society & Museum and ISU School of Technology was formed to create the Duke Energy exhibit.

Among the projects included in the exhibit are the “Yesterday, Today, and Tomorrow” story of electricity, the “Portrait That Comes To Life” and the technology, research and content for the new history center’s five or six touch-screen learning centers.

“The ISU History Department jumped in and they started to write the content that will be included in five of those touch-screen learning centers,” Tingley continued. “It was an awful lot of fun working with the students and the faculty on these projects.”

“Our company is committed to the communities we serve,” he said. “This thing is going to be another jewel in our community and our county.”

Curtis expressed gratitude to all involved with the Duke Energy exhibit.

“We couldn’t begin to accomplish the kind of work we need to do to prepare the future leaders, workforce, innovators, creators without partnerships,” she emphasized. “They are so key to everything we’re doing.”

Among the ISU faculty members who guided students through these projects were Edie Wittenmyer, senior instructor for the Department of Electronics and Computer Engineering Technology, and Andrew Payne, chairperson and professor in the Department of Built Environment.

“My students come from different programs in the [ISU] College of Technology,” said Wittenmyer, who’s served as the project leader for ISU. “I get a diverse group because it’s mandatory that they take project management. ... These students put in a lot of effort. They probably had a good 100 hours of research [over a 16-week period].”

“I met with Edie and Susan [almost a year ago] to envision what the cabinet design would look like,” explained Payne, whose Construction Club students designed and built the cabinet for the electricity exhibit. “We came up with a basic design last summer, then we continued to communicate with any ideas that anybody came up with.

“We had a couple revisions last semester. Earlier this semester, we finally got the cabinet size determined and the layout of the equipment determined ... I bet we probably had 40 man hours put into just building the cabinet. We had about 30 students who had at least some input.”

“It’s amazing what they’ve done,” Tingley told the Tribune-Star after the ceremony. “It was nice to see young people getting excited about history.”

Thursday’s ceremony was in conjunction with today’s inauguration of Curtis as ISU president at 1 p.m. in Hulman Center. 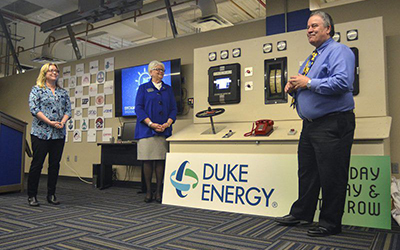