I'm from Zimbabwe, and I know that when you walk the streets of Zimbabwe, even saying the word ‘Rhodesia’ is considered racist or prejudiced,” says Kay Layton, an artist and musician in Calgary.

“It brings up such a dark past, a dark history.”

Layton, who moved to Canada when he was four years old, was responding to an investigation published last week by Ricochet. It looked into Fireforce Ventures, a Calgary-based company that sells Rhodesian flags and war memorabilia.

The investigation revealed that the company’s shadowy owners are serving members of the Canadian Forces, and tied company accounts and personnel to social media posts using racial slurs for Black people and Jews.

One of the owners pushed the company’s products on a white nationalist podcast, telling the audience, “If you’re into the political stuff, get yourself a flag. Because normies don’t know what that flag means, the Rhodesian flag.”

Fans of the Alberta company have argued there’s nothing wrong with celebrating Rhodesia and that their interest is historical. Black people enjoyed a high quality of life thanks to the Rhodesians, they say. There were Black soldiers in the Rhodesian army, and it was really all about fighting terrorists.

But the Zimbabweans and academics interviewed for this article said otherwise.

‘The master of Rhodesia’

Rhodesia was a brutal and short-lived era of white minority rule in what is now Zimbabwe, marked by vicious repression and restrictions on the most basic rights of the Black majority.

Awareness of that history is dim at best here in Canada, where “normies” don’t know about the Rhodesian flag, famously worn by white supremacist church shooter Dylann Roof.

“It just screams out white supremacy, it screams out racism, it screams out extreme hatred towards Black people, towards African natives, the people of Zimbabwe,” says Onai Petra Paswani-Abote, who moved to Calgary from Zimbabwe three years ago and works for a non-profit organization.

“That’s what I associate Rhodesia with and what Rhodesia stood for.”

After the United Kingdom insisted on a transition to majority rule, Rhodesia broke from the British Empire, declaring independence in 1965. Leading the unrecognized state and bent on preserving white colonial power was its prime minister, Ian Smith.

“There will be no African rule in my lifetime,” said Smith, a figure revered by devotees of Rhodesia.

“The white man is the master of Rhodesia, has built it, and intends to keep it.”

Paswani-Abote is what she describes as a “born free,” the name for Zimbabweans born after the collapse of Rhodesia in 1979. But her parents told her how they hid in “keeps” and under beds, watching the lights of the advancing Rhodesian army’s firing line.

The indigenous Africans had fought the colonists before, in the late 19th century, referring to it as the Chimurenga (roughly meaning “liberation struggle” in the local Shona language). Now they were engaged in what they called the Second Chimurenga — a fight for their lives and their humanity.

“Separate and unequal” is a useful way to understand the Rhodesian system, according to Dr. Andrea L. Arrington-Sirois, an assistant professor of history and African and African American studies at Indiana State University.

Like apartheid South Africa, Rhodesia strictly enforced curfews and imposed a pass system to restrict the movement of Africans, who had been forced to live on reserves.

Paswani-Abote recalls her parents describing how Black people caught without a pass given to them by an employer or other white person would be brutalized.

“In order to accommodate the swell of white settlers, racial segregation and oppression was very important,” says Dr. Arrington-Sirois.

‘The possibility of death’

The colonial state had used taxation to compel African men into a labour pool whose wages were kept pitiably low.

They were often away working, separated from their families on the reserves for long periods of time.

If women decided to visit their family members outside of the reserves, they were put through an agonizing process, according to Dr. Arrington-Sirois.

“They also had to use the pass system that at times included them having to go through an invasive gynecological exam to screen out women with venereal disease,” she says.

As for the claim that the Rhodesian struggle was against “terrorists,” Dr. Arrington-Sirois has little time for it.

“Africans were referred to as the terrorists in their own land that had been taken over by hostile outsiders,” she says. “The rhetoric was paternalistic and steeped in racism.”

From the start, the Rhodesian system was based on separation and inequality.

“The possibility of death always lingered,” explains Layton, “because there was no law that protected Black people at that time. [It] basically just protected the white citizens.”

The operators of Fireforce Ventures have urged followers on social media to “slot floppies” and awarded themselves the honour of “Floppy Slotters of the Year” on Facebook. While those obscure terms might go over many heads, their meaning is clear to Layton.

“The word ‘slot’ basically just meant to go kill or harm,” he explains, and “floppy” was “a racial slur for Black people. It was used among white citizens [and] was the equivalent to the N-word at the time for Black people.”

“So to say ‘get in, we’re slotting floppies’ is absolutely derogatory, it’s racist,” says Layton, referring to a meme posted by Fireforce.

What about the hashtag #MakeZimbabweRhodesiaAgain, used habitually by Fireforce on social media?

“It’s veiled racism,” says Layton. “If you were to say that to someone that knows the history, they’d know that to make Zimbabwe Rhodesia again means to get it back under minority white rule.”

“That’s how these guys are able to hide in plain sight, because they're not waving a Nazi flag, or a Confederate flag, or something like that. They’re using the white Rhodesian flag.”

The Rhodesian flag has become popular among the alt-right precisely because of its coded meaning.

According to Barbara Perry, a criminology professor at the University of Ontario Institute of Technology and director of the Centre on Hate, Bias and Extremism, “it’s not unusual for white supremacists to exploit symbols, flags, etc. that represent for them some mythical past — the Confederate flag, the red ensign, etc.”

‘Turning on their own people’

Shortly after publication of Ricochet’s investigation, Fireforce Ventures posted a picture to Facebook featuring three Black soldiers with the Rhodesian army identified as recipients of the Military Cross in 1958, seven years before Rhodesia declared independence.

The idea that Rhodesia couldn’t be racist because its army included Black soldiers has been a key theme for the company and its supporters.

Those in the Rhodesian army when the war started “likely felt they had little choice but to continue with their jobs,” explains Dr. Arrington-Sirois.

And it’s virtually certain that “most were coerced with promises of protection, pensions, and positions once the war was completed.”

But the African soldiers were not treated as equals by their white Rhodesian counterparts, she says. And many Africans in the Rhodesian army were working as spies for the liberation movement.

Overall, those Black soldiers serving Rhodesia were viewed as traitors by other Africans.

“They were looked at as people that were turning on their own people,” says Layton.

‘Minority rule was based on racism’

For Paswani-Abote, Rhodesian nostalgia is something people need to understand in context.

“Minority rule was based on racism,” agrees Dr. Arrington-Sirois.

“I think you can draw comparisons between that regime and the South African apartheid regime, and thus items like the flags that commemorate those regimes. 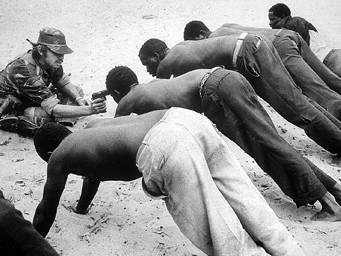