Transforming magnetic storage might stem from the vision of quantum

Magnetic materials have a worldwide market share of some $50 billion per year. A new frontier in the study of these materials, femtomagnetism, could lead to ultrafast magnetic storage devices that would transform information processing technologies with storage devices several orders of magnitude faster.

Now, researchers report a tabletop method to characterize such a faster magnetic storage using high-harmonic generation of laser light in iron thin films, which the researchers liken to the generation of sound waves by striking keys on a piano.

They present their work this week at the 2019 American Physical Society March Meeting in Boston, and one of the researchers will also participate in a press conference describing the work. Information for logging on to watch and ask questions remotely is included at the end of this news release.

If you play a piano softly, the piano hammer hits a string generating a sound with a particular fundamental frequency, lead researcher, Guoping Zhang, explained, but if you hit harder, tone quality changes from bass to treble. "In the bass region, there are 50 to 60 times the fundamental frequency or 50 to 60 harmonics," he said. "In our work, we essentially do the same thing with light, converting a single frequency to many, many multiples of the light frequency, or high harmonics."

The method measures how electrons move, or spin, under the influence of a strong laser pulse on a quadrillionth-of-a-second time scale. There are many ways to measure magnetic properties of a sample, Zhang said, but the majority lack the capability to resolve the quantum mechanical spins which are at the center of spintronics.

"The novelty of our method, which was never known before, is that we can directly detect the spin signal," Zhang said. "This signal is crucial and is at the core of spin-based technology."

"Our work was inspired by several pioneering works before us," Zhang said. The first is femtomagnetism where an ultrafast laser pulse, instead of a magnetic field, can be used to demagnetize a sample. The second is high harmonic generation research in other materials.

"We combined these two fields together," Zhang said. "In the future we plan to examine much more complicated but technologically important materials with complicated spin textures difficult to investigate with other techniques."

Zhang says the group's work has the same vision as quantum technology in its use of electron spin to carry information, but is more practical because it originates from magnetic storage ideas. "Our present work will provide a way to characterize these quantum bits," he said. 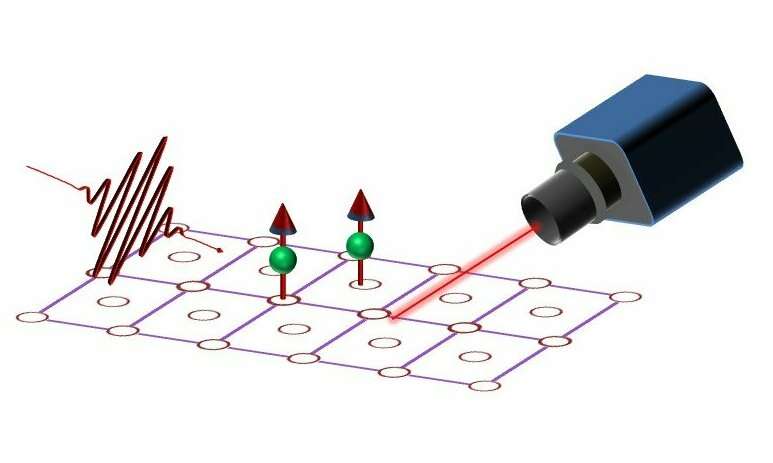