One-woman show to be performed to raise money

The show will be performed July 19 through 21 at United Campus Ministries, 321 N. Seventh St., and July 26 through 28 at the First Unitarian Universalist Congregation, 1875 S. Fruitridge Ave. Friday and Saturday performances will be at 7:30 p.m., and Sunday matinees will be at 4 p.m.

“Clytemnestra, or Crime,” written by French novelist/essayist Marguerite Yourcenar, is based on the Greek legendary character who killed her husband, Agamemnon, after he returned home from the Trojan War. In this essay adapted as a play, Clytemnestra comes back from the dead to defend herself and her murderous action before an audience of today, as if they were a jury deciding her fate.

The play is produced and directed by Arthur Feinsod as a tribute to Dorothy Drummond, a former Indiana State University geography instructor, who died last year after devoting herself to United Campus Ministries, Bread for the World and other community causes.

Feinsod, who served as artistic director of SummerStage/Crossroads Repertory Theatre from 2001 to 2014 and, more recently, Theater 7, calls “Clytemnestra, or Crime” a “fascinating reinterpretation of a psychologically complex and powerful figure” based on the character immortalized in works by the ancient Greek tragedians.

Feinsod will present a free hour-long talk on the original Clytemnestra story, joined by Monts-Bologna with speeches by Aeschylus’ Clytemnestra. The lecture will begin at 4 p.m. on July 20 at the First Unitarian Universalist Congregation. While this commentary and reading will be useful both for those who have already attended “Clytemnestra, or Crime” on opening night as well as for those who plan to attend a future showing, it is not necessary for following or appreciating the performance.

Admission for the show is $20. To reserve seats for all shows, call United Campus Ministries, 812-232-0186 between 10 a.m. and 3 p.m. Monday through Friday before July 26. Patrons will be asked to pay for tickets in cash at the door prior to the performance. Checks and credit cards will not be accepted. Seating is limited in both locations. Admission will be based on the order of calls received so it is advised to call early. While pre-show reservations will be honored first, people showing up at the door will be seated on a first-come, first-serve basis if seats are available. Arrive at least a half-hour before show time.

Monts-Bologna is well-known to area theater-goers, having appeared in many productions of Indiana State University’s Crossroads Repertory Theatre, including the current production “Romeo and Juliet.” She and Feinsod teamed up for a number of local productions including “Death of a Salesman,” “The Gospel of Everyman,” “Glass Menagerie,” “Plaza Suite” and “The Effect of Gamma Rays on Man-in-the-Moon Marigolds.”  Monts-Bologna also appeared professionally in many productions in Chicago, Milwaukee and New York, including the part of Dr. Aja Doyan in the long-running TV soap opera “Search for Tomorrow.”

“Clytemnestra, or Crime” appears as an essay in “Fires,” by Yourcenar, translated from the French by Dori Katz. The book was published by Farrar, Straus & Giroux and later reprinted by University of Chicago Press. 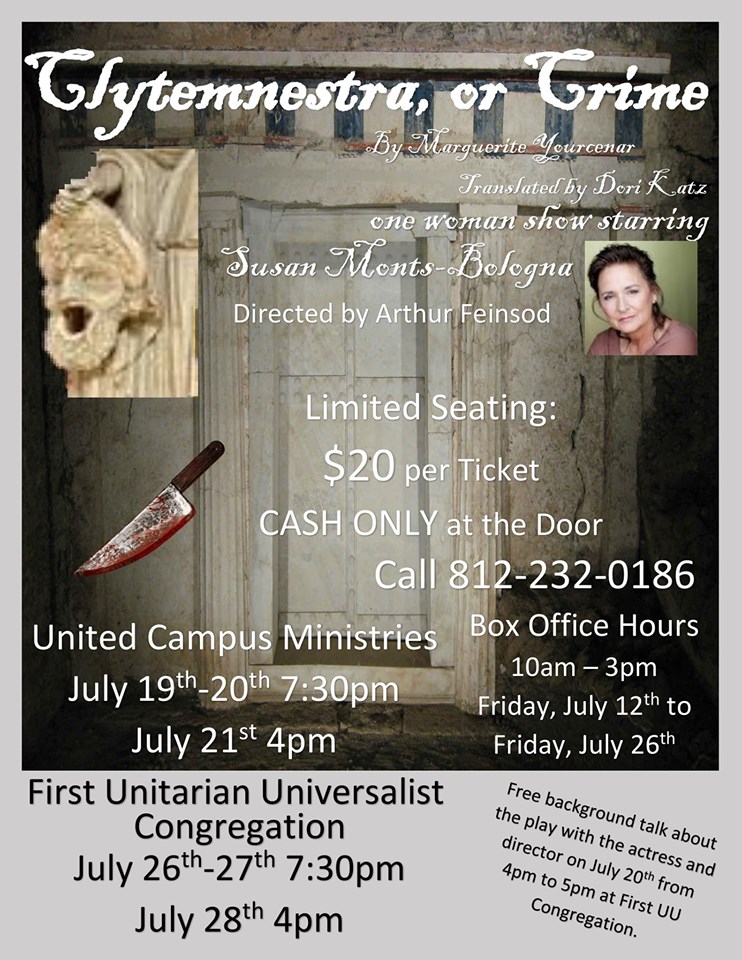