Mike Lunsford: Reliving ‘The Age of the Crinoids’

My family has come to accept that I am a dogged gatherer of feathers and shells and leaves and stones, and our window sills and bookcases carry the burdens of what I have collected.

Among my most prized possessions are crinoids and other fossils, gathered over the years on trips to creeks, dry washes, lake shores, and gravel pits. They have interested me since I became free to explore on my own, since perhaps the days I visited a favorite great aunt for forays into her Putnam County pastures or walked a mile to the west from my first house to wander nearly always-dry Spring Creek.

Above all, I still seek crinoids, otherwise erroneously referred to as “Indian beads.” Their shapes, their colors, their textures tell a tale of an earth yet untouched millions of years ago by human hands. Where I live — except at its very highest points — the land was once covered by warm shallow seas that teamed with life, and now, amid the scrub of cocklebur and bull thistle and spring rain-deposited sands and winter-borne moraines, they lie in quiet repose to be kicked up by my boots.

Crinoids are not plants, and I use that term in the present tense because they still live in modern oceans today. According to my go-to geologist, Indiana State University’s Jeffery Stone, they are, however, “far less abundant now.” Crinoids have a “root-like structure (a holdfast), a long columnar stem (the parts people usually find), and a head (crown) with two components: arms and a ‘calyx (a cuplike structure).’”

Stone says, “Readers might be surprised to know that crinoids are classified as echinoderms and are actually more closely related to starfish and sea urchins than plants, although they don’t look alike.”

Crinoids reached their peak in both form and abundance during the Mississippian period, forever ingrained in my mind by many of the hundreds of illustrations in one particular “Nature Guide” that depicted blue seas inhabited by colorful corals and brachiopods. The lush green lands that anticipated the age of great coal swamp forests and their huge dragonflies, massive ferns, and early reptiles were yet to follow; the Jurassic Age with its massive dinosaurs, still a 100 million years away.

Like many others who envisioned Native Americans collecting crinoids for decorative uses just a few centuries ago, Stone dispels that theory and nickname as well: “Early settlers traded glass and ceramic beads with Native Americans, but I don’t think they were actually ever worn by natives, or even traded. Instead, they just resemble the types of ceramic beads that were actually involved in these exchanges.”

It is said, however, that the star-shaped columns of some crinoids — pentacrinites — did hold some religious significance as “star stones” by some early cultures since they were rock-hard symbols of the sun.

Stone explained to me why crinoids are so commonly found in our region: “The Mississippian was actually known as ‘The Age of the Crinoids.’ It is thought to be a by-product of the types of environments where crinoids were best adapted. In geological terms, these are called ‘carbonate ramps,’ which are gradually shallowing marine settings that tend to be dominated by limestone-generating organisms, such as crinoids.”

He added, “If you look at a geological map of Indiana, you will find large swaths of exposed bedrock in Indiana that are Mississippian in age… the western and southwestern part of Indiana was a marine setting. That all changed at the end of the Mississippian, when the shallow seas receded from the continents.”

From the vantage point from which I write this story, I sit on yellow-red clay as hard as concrete. But below me, through a short walk down into the woods, I hike onto wetter lowlands where moisture filters through gravel that was once a sea bed.

It is there where the creeks and rivers I walk wash out rocky sandbars, and on them I find crinoids and other fossils of their age: bits of corals and bryozoans that once lived in colonies. Not far away sit the coal fields created hundreds of centuries later, their ferns and rushes lying in wait of a steam shovel or rock hammer.

Collecting crinoids has been a worthy venture over the years, for even though I now keep my head turned to the treetops for the birds I love to photograph, there is a satisfying feel to the rocks and fossils I can find at my feet.

You can contact Mike Lunsford at hickory913@gmail.com; his website is available at www.mikelunsford.com. Mike’s latest book, This Old World, is due to be released this fall. 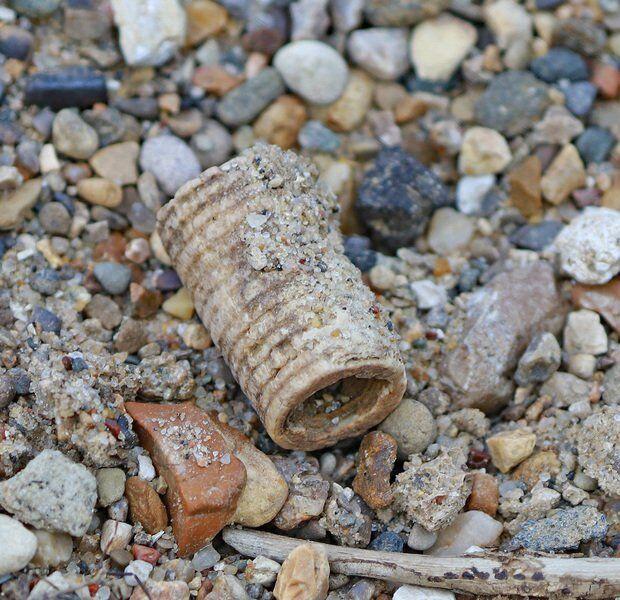