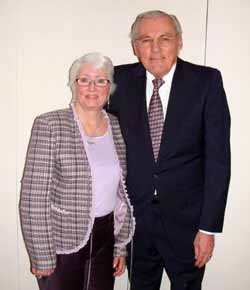 "Nature," as the philosopher Bernard Spinoza once observed, "abhors a vacuum" and moves quickly to fill it.

So, too, it appears to be Don Gongaware's nature to abhor a vacuum.

In his case, the perceived vacuum was a lack of educational opportunities for those interested in pursuing management careers in the insurance industry.

His feelings about this subject were based on his personal experiences and observations during his long and distinguished career.

"I got into the field in the classic way - by accident," says Don, who retired in March 1998, as chief operations officer and executive vice president of Conseco. "I had one semester of school left and my GI Bill was running out. I had a wife and three kids at home, and needless to say, I needed to supplement my income.

"An employment agency asked me if I wanted to become a group underwriter. It didn't pay much, but I jumped on it as a temporary job until I got my degree. Thirty years later I retired from the insurance industry."

As his career progressed, he began to notice that he wasn't the only one who had been introduced to the business in this fashion.

What he discovered was that even with the development of a number of excellent insurance studies programs at American universities over the past several years, there was still something missing from the equation.

"I saw that there is really no niche for general insurance management studies in our universities, even with the many fine programs in the field that now exist," he explains. "Outside of some specialties such as actuarial science, accounting, and finance - as important as these are - nobody is really teaching students and industry per se.

"There's no focus on the concept of insurance, on what's really involved in this tremendously complex business, or on how it operates in today's world," he adds. " I felt this situation needed to be addressed."

So Gongaware and his wife, Pat, moved to fill the vacuum.

The means they chose was a $5 million gift - in 1999, the largest in Indiana State's history - to be used to fund an endowment for the Donald and Patricia Gongaware Center for Insurance Management Development.

"Our ambition is to make ISU's Insurance and Risk Management Program the top program in North America," says ISU President John W. Moore. "The Gongaware's gift will not only enable us to pursue that goal but to reach it."

Through the auspices of the Center, a number of activities and initiatives designed to raise the profile of Indiana State's insurance program and enhance management training opportunities for insurance executives will be embarked upon. These include:

The naming of four Gongaware Professors from various disciplines who will have the opportunity to pursue internships in the insurance industry;

The development of an Executive Development Program for top-level insurance executives;

The establishment of a Summer Insurance Academy for mid-level executives; and

The activities of the Gongaware Center will not be limited to campus. A satellite Center will be established in the Indianapolis area, which is the nation's third-largest insurance center, to allow those working in the industry broader access to the Center's continuing education programs.

"My goal for the programs embodied in the Center is to raise the sights of the University and to attract qualified candidates to learn more about the industry," Don says. "I'm interested in improving the management skills of executives at all levels of the industry - not just CEOs - and I think this program will do much to accomplish that."

The journey to making the Gongaware Center a reality at ISU began in 1991 when Dr. Larry Coleman, who was then the chair of ISU's Insurance and Risk Management Program, invited Gongaware to serve on the Insurance Advisory Council.

"He came up to my office in Carmel and asked me to be on the board of some advisory council at some school in Terre Haute - a city I had never visited,"

"He was quite persuasive, and I agreed to give it a go," says Gongaware, who continues to serve on the council. "As time went on, I quite frankly fell in love with the University and its people."

Gongaware, who is an alumnus of California State University at Sacramento, also came to respect ISU's nationally recognized Insurance and Risk Management Program. Still, despite all of the good things he saw, he felt that more could be done with the program.

"I began thinking about what we could do to enhance the insurance program," he says. "As good as it was, I believed we needed to do something more with it if it was really to meet the needs of the industry."

That something more turned out to be the Gongaware Center - an idea that began to take shape about a year ago over dinner with ISU President John W. Moore and ISU's director of Development.

"We were talking about what we could do to enhance the insurance program and how we could realize President Moore's vision of it becoming the finest insurance program in North America," he says. "Things started snowballing from there."

"We didn't discuss money at the time, but I asked the two of them to go back to campus and develop a program that would stimulate the insurance department, and they did," he adds. "Everything in it - the center, the scholarships, and the professorships - was structured in a way that appealed to me and to what I wanted to accomplish. Pat and I then talked it over and decided that $5 million was the right amount."

The "real-world" orientation of the Gongaware Center is no accident. The Gongawares place a good deal of value and importance on practical experience.

"I would tell students to start the real world in college," says Pat, "and not to wait until after they graduate. They need to be visionary about their education by looking ahead and not just focusing on what they need to do to get through the next day. I think those students who choose to participate in and understand the world at-large will have a leg up on the competition and will be the most successful."

Don adds, "Those students interested in insurance - or other aspects of business - need to stay tuned to what is going on in the financial world. They should read the Wall Street Journal and watch the financial news shows on television everyday."

Don's retirement notwithstanding, he and Pat intend to remain active with the Center and no plans to leave Indiana, their home for the past 13 years.

"We really like Indiana and the people here," says Pat. "We built our home here and this is where we are going to stay."

All of which will make it easier for them to continue to be involved in the activities of the Center.

"Both of us will sit on the Board that will oversee the Center's activities," says Pat, "and I know Don plans to stay active with the Insurance Advisory Council and the ISU Foundation."

Teaching in some capacity also may be in Don's future.

"It's something I've been thinking about doing in an adjunct or visiting role. I definitely think I would have something to offer," he says.

The Gongawares also plan to "take a great interest" in those students who are named Gongaware scholars.

"We most definitely will follow them through their college years and into their professional careers," Pat says.

The future, it seems will hold no vacuums for the Gongawares.

That just wouldn't be natural for them.

Starting July 1, 2006, Terrie Troxel began his new position as executive director of the Indiana State's Gongaware Center for Insurance Management Development. Troxel was welcomed to the ISU family in April 2006 when he joined the faculty in the College of Business.

Troxel is a graduate of Illinois Wesleyan University. He earned his master's and Ph.D. in managerial sciences and applied economics from the University of Pennsylvania. He has also completed the Lloyd's of London Executive Education Program at Oxford University. He has served as president and chief executive of the American Institute for Chartered Property Casualty Underwriters and as the executive director for the Insurance Research Council, Inc.

In addition Troxel has also worked with the National Association of Independent Insurers, been an associate professor at the University of Nevada and University of North Texas and is a current member of many organizations.(From "Troxel named new director of Gongaware Center", StudentMedia, August 18, 2006)

In the fall 2007, the college introduced a new financial services major and minor. Students electing for that course of study must take Introduction to Insurance and Risk Management, Introduction to Financial Services, Business and Society (Ethics), Investments and Financial Institutions as core classes. Each student pursuing the new major has the option to complete 12 credit hours in accounting, banking, insurance and risk management or investments.

In order to provide support for this broadened financial services program, student activities of the insurance and risk management program are being combined with those of the Gongaware Center, which has hired additional personnel, and is reallocating responsibilities among faculty and new staff members.

The center also hired Rebecca Shorter of Terre Haute as director of career development. Her duties include directing activities related to scholarship programs, student recruiting and mentoring, career development, internships and job placement. Shorter graduated in 2005 from ISU, where she was a Gongaware Scholar, with majors in insurance and risk management and finance.

She later earned her MBA from ISU in 2007. She also served as a Networks Graduate Fellow while earning her MBA. She has been a licensed associate for Nationwide Insurance since 2004, mainly focusing on personal lines property and casualty insurance, and she was an instructor for the College of Business during the summer and fall of 2007. (From "ISU Gongaware Center announces restructuring", Tribune Star, January 29, 2008)