The following was taken from the 1993 Sycamore Yearbook 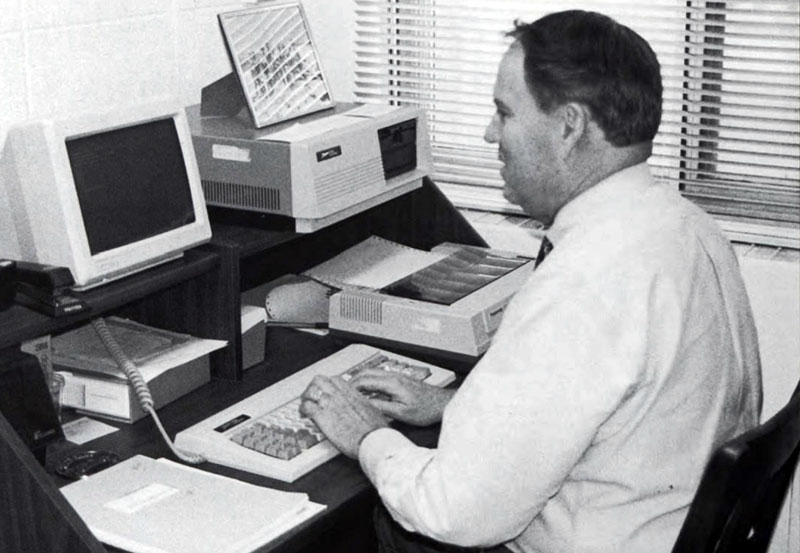 The Insurance Program at Indiana State University reports 100 percent placement of its majors.
Dr. Larry Coleman and the staff of the program have put in many hours to make it a success.
Photos: Robin Jenkins. Story: Melinda Maloof - 1993 Sycamore, pages 128-131 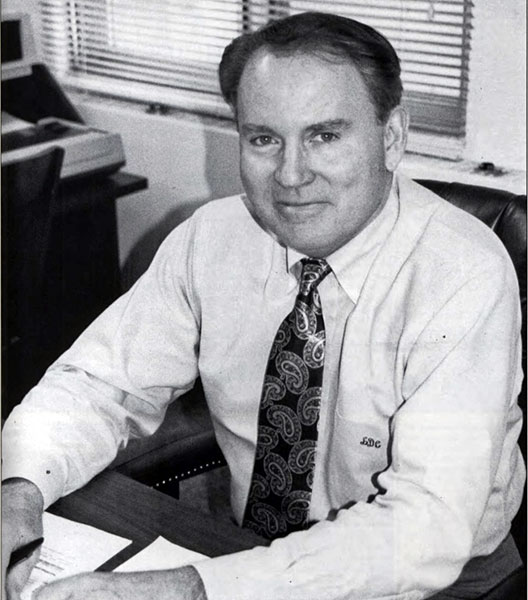 Business consultant, author and lecturer are just a few ways of describing Dr. Larry Coleman. Coleman, coordinator of ISU's Insurance Program, didn't begin his career as a college management and insurance professor. His exposure to the industry began as a special business insurance agent for Northwestern Mutual Life in Terre Haute, then he taught business insurance and finance at universities across the country. But in 1971, Coleman became a family economics and home management professor at ISU. He cited his interest in working with college students as the reason for the career change. "I enjoyed the association with the students and seeing the results of my efforts fairly quickly," the professor explained.

Through his years at ISU, Coleman has also served as associate dean of the School of Graduate Studies, professor of management, and now as coordinator of the Insurance Program, which began in 1984.

Coleman admires reasonable, intelligent and "quality people." "I like people who get things done," he said. "I'm interested in results." And he identifies with them.

But that's not all.

And there's even more.

Coleman is also a member of Beta Gamma Sigma; Gamma Iota Sigma (the national insurance fraternity), National Association of Life Underwriters; Afro-American Advisory Council, Athletic Committee and the Health Benefits Committee, to name a few. But surprisingly, Coleman said the one regret he has had about his life is that "for a number of years, I didn't maximize my time."

Dr. Peter J. Mikolaj, an insurance professor, said he has the "highest regards" for Coleman. "He has been very instrumental in initiating the program and bringing it to where it is today," Mikolaj said. "He also spends countless hours meeting with the students' and goes the extra mile in maintaining contacts throughout insurance industry."

Christina LaFevor, who graduated in May with an insurance degree, agrees. "He's the fire behind the program," she said. But LaFevor thinks Coleman is more than a professor. "He's a friend," she said, "he will go out of his way for students and takes the time to get to know them." "I can't say enough about him," she added.

When asked about retirement, Coleman, 59, said, " I don't plan to retire, just leave the teaching profession." He plans to continue his hectic schedule, which would include traveling, gardening and landscaping, and spending more time with his family - his wife, three children and six grandchildren. Family has been an inspiration to Coleman. He said he has always been concerned with their opinion about me, and because of that, I am more motivated."

Larry Coleman built ISU’s successful insurance program from the ground up. Not too many programs in too many colleges can declare 100 percent placement for their majors, but ISU's Insurance Program can. And it hasn't taken many years for this program to become so successful. In 1984, the dean of the School of Business asked Dr. Larry Coleman, a business professor who taught insurance classes, to "give some thought to developing an insurance program" at ISU , because before that time, only five insurance classes were offered. But Coleman did more than just think about it. Because no college in the state offered an insurance program, the professor traveled to other universities throughout the Midwest and throughout the insurance industry for the next two years to "determine if this degree was needed," Coleman said. After deciding it was, Coleman presented a proposal in June of 1989 to the Indiana Commission for Higher Education. Three months later, the insurance program was born. And nine months later, the program graduated one insurance major. But that number has grown significantly over the past four years. As of Spring 1993, 85 students majored in insurance and 50 minored. Coleman said the average grade point average is 3.2. "These students are outstanding young people," he said. Coleman also tracks the graduates, and from 1989 to the present, 98 percent of the graduates are still in the industry.

A group that Coleman said "has been instrumental in moving the program forward," is the Insurance Advisory Council - 24 men and women in the insurance industry who make up the program's board of directors. They contribute financially - in the past three years, scholarships in excess of $83,000 have been awarded; sponsor field trips to insurance state conventions; assist with banquets and national speakers; and aid with student internships. During the summer of 1988, one student completed an internship. In 1992, 14 did. Interns are usually employed in all areas of insurance - including pension, claims or benefits, for 12 to 15 weeks. Such companies include Allstate, American United Life and Indiana Insurance, all of Indianapolis; Conseco and Monroe Guaranty Insurance, both of Carmel; and Forrest Shearer of Terre Haute. "It's also a great investment for the employer," Coleman said.

Christina LaFevor, a May 1993 graduate, has participated in two internships in Indianapolis. LaFevor said her interests were broadened by participating in those internships because they assisted her in understanding the practical aspects of the insurance field. "They have enhanced my knowledge and skills about insurance," she said, "and have also reassured me that insurance is people business," the graduate added.

The mentor program is yet another feature of the insurance program. Created to establish relationships between students and insurance professionals, students are paired with outstanding professionals who act as role models. "It gives them someone in the industry to connect with," Coleman explained. "They can take them to a national insurance convention, to hear a speaker, or even to dinner," he added. By participating in the mentor program, students gain knowledge that will ease their transition into the insurance industry.

Forrest Sherer's Dinkel said he has been very impressed with ISU's insurance program and with its students. "It [ISU] could send any student to another insurance program at another university and that program couldn't measure up."

The start date of the Insurance and Risk Management Program at Indiana State is now taken as 1989 and in 2014 the program celebrated its 25th Anniversary at the Indiana Roof Ballroom in Indianapolis. (photo gallery) 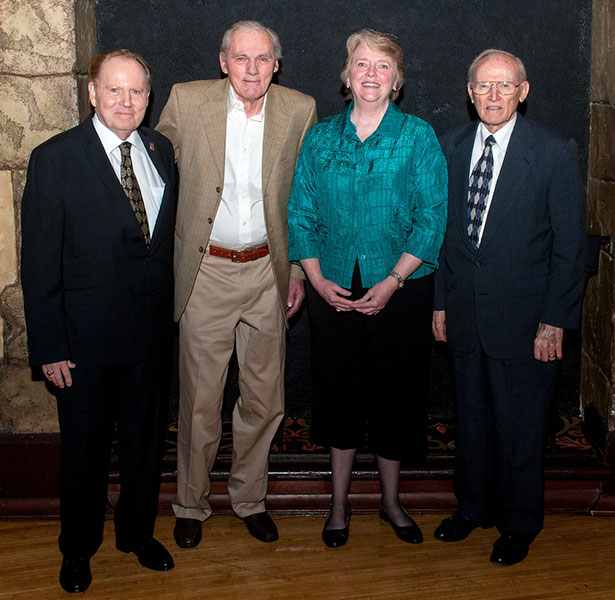 Larry Coleman was the professor instrumental in building the IRM program at Indiana State University.

Don Gongaware and his wife Pat gave a $5 million gift, the largest in Indiana State's history at the time, to be used to fund an endowment for the Donald and Patricia Gongaware Center for Insurance Management Development. The Center was created in 1998.

Mary Ann Boose Kent was the coordinator of the Insurance and Risk Management Program at Indiana State University.

Mr. Hudson entered the insurance business in 1959 and was concerned that there was an absence of opportunity to learn the business in a campus environment. In 1988, Larry Coleman asked him to join Indiana State University's efforts to develop a degree major in insurance and risk management. Within three years the ISU Insurance and Risk Management Program became one of the top four in the nation.

Before Pete Hudson passed away on November 6, 2019, he wanted to honor Dr. Larry Coleman, who began Indiana State’s insurance program and involved Hudson and other insurance executives in the process. Hudson was Indiana Commissioner of Insurance from 1975-81 and was President/CEO of Monroe Guaranty.

“Pete Hudson and Larry Coleman provided the energy and vision to develop our nationally recognized Insurance and Risk Management Program here at Indiana State University,” said Jack Maynard, Interim Dean of the Scott College of Business. “Pete’s trust will provide the resources needed to continue to attract high quality faculty that are essential for the program to remain nationally known and serve the needs of our industry partners. We are eternally grateful to Pete for this gift.”

Hudson’s daughter Ann Hudson said her father, who is not an ISU alumnus, wanted the university’s Insurance and Risk Management program to continue to thrive.

“Dad and ISU were a match made in heaven,” she said. “Leaving a gift to endow this chair gave him peace that this important Hoosier treasure would ‘stay.’ Because of his deep sense of right and wrong, he would never have left this gift in his estate if he didn’t believe in the program to produce what he thought were ideal results. He loved Larry Coleman. Larry built an excellent program. So I love that these two men are honored together through this endowed chair.”

Hudson entered the insurance business in 1959 and was concerned about the lack of opportunities for students to learn about the business in college. In 1988, Coleman asked him to join ISU’s effort to develop a degree major in insurance and risk management. Within a few years, ISU’s Insurance and Risk Management Program was recognized as one of the top programs in the country. From $1 million gift will create endowed professorship of insurance. (February 21, 2020).