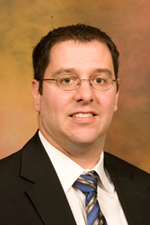 Large lines account analyst for Tobias Insurance Group, Inc. in Indianapolis, Schafer studied insurance and risk management and health and safety while at Indiana State. He has designations as a Certified Insurance Counselor (CIC) and an Associate in Insurance Service (AIS). Prior to Tobias, he served as a commercial underwriter for Ohio Casualty Group. Schafer is a member of the Scott College of Business' inaugural Young Professionals Board and serves as a mentor to Scott College of Business students.

Julie Cunningham Schlosser is a Trust Officer for Old National Bank in Terre Haute. She has over 15 years of experience in the banking industry. She started at Old National as an Investment Assistant and has since worked in the Risk Management area as a Loan Review Officer and Underwriter for consumer loans. She serves also as the Treasurer for the Estate Planning Council of Illiana, Inc. 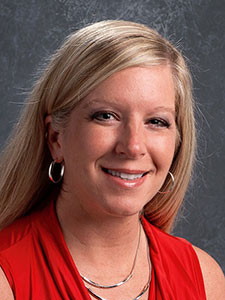 Schulz has also remained an active alumna, serving as a presenter for the Business Education Clinic and working with Networks Financial Institute's K-12 Financial Literacy Task Force in 2003 and as an inaugural member of the Scott College Young Professionals Board when it began in 2008.

A small town kid from Terre Haute, Greg Scott knew he would follow in the footsteps of his mother, aunts, uncles and siblings and become a Sycamore one day. What he hadn’t expected was all of the opportunities an Indiana State University education would present to him. Scott worked his way through college as an employee at an accounting firm, where he discovered a job opening for accountants at PriceWaterhouseCoopers and through his hat into the ring. The risk paid off for Scott, a partner at PricewaterhouseCoopers, who worked for the company’s Paris office before moving to San Francisco to provide tax savvy for the wine industry. Scott’s story is one of hard work, staying curious and never accepting the status quo. 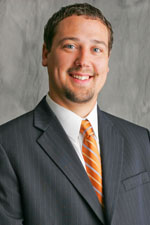 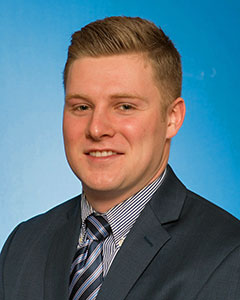 Spencer also got a big boost on his career path while at Indiana State. Although he recently received his degree in business management, Spencer is already a top performer for Sigstr. He started working for the company in August 2016 as a business development representative.

“Sigstr is a SAAS (Software as a Service) company based out of Indianapolis,” Spencer said. “Our main focus is unlocking employee Email Signatures as an owned marketing and content distribution channel. Indiana State is a Sigstr customer.”

Spencer’s job is to present high quality opportunities to the sales team. “I mainly prospect organizations and reach out through email marketing campaigns.”

While at Indiana State, Spencer was active in the Kappa Alpha Order, was vice president of the Interfraternity Council and was sales ambassador for Scott College of Business. Among the professors who greatly influenced him, Spencer said, are “Dr. David Fleming, one of best professors out there; Dr. Evan Kubicek, because he opened my eyes to tech startups; and Bo Mantooth, an incredible leader and role model.” 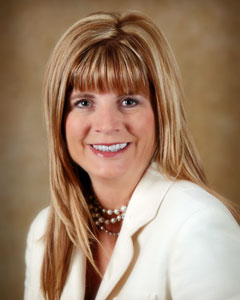 Marsha, who hails from Clayton and earned a bachelor’s degree in accounting from Indiana State, has been employed with the Indianapolis Airport Authority for 20 years.

Her association with the airport began even earlier, though. After beginning her career as a CPA at George S. Olive & Co., now BKD, the airport became her first client and the one month every year she spent handling the business’ audit became her favorite time of year. 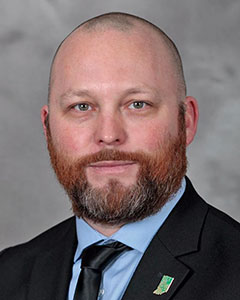 Starting with the information technology contract work, the Indiana State Police and now as director of information security for Indiana University Health, he was able to bridge his management information systems major with a technology background and enter the cybersecurity field as it was beginning to take off.

Sturgeon left Indiana after graduation and headed west until he decided to return to the state. Upon his return, his work included a contract position with the State of Indiana’s Office of Information Technology. In early 2006 he decided to pursue his interest in law enforcement by applying for the Indiana State Police’s 67th Recruit Academy. In 2009, Sturgeon sought a sergeant position working in IT with the Indiana State Police.

In 2017, Sturgeon began serving as director of security operations center for Pondurance, which sells security services to companies, and a year later he started as a cyber-consultant with Ernst and Young, working with Fortune 500 companies domestic and international helping to advise, consult and access their security. 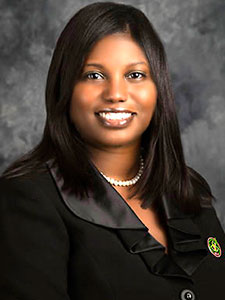 “I was a technology teacher for many years, so the “T” in STEM is something I’ve been involved with for many years including serving as the director the Business & Information Technology Career Academy for Pike High School,” Swayne said. “The Career Center was the vision of our superintendent. I was appointed to work on developing the programs and visiting other centers in preparation of ours opening. We launched the program in August of 2015, and I was appointed as the director.”

Greek life is an important part of the university community, Swayne said. “I’m happy to hear that many of the chapters are working their way back on campus,” she said. “I look forward to Alpha Kappa Alpha Sorority returning in the very near future. It definitely made a large impact on who I am today.”

While at Indiana State, Swayne also was a resident assistant and later a graduate assistant hall director. “That afforded me the opportunity to get involved in higher education administration,” she said.

It was at Indiana State that Swayne first became acquainted with the man who would later become her husband, Romel A. Swayne. “We met at ISU many years ago and got re-acquainted during a homecoming weekend,” she said. “We went on a date the Wednesday after homecoming and have been together ever since — almost 10 years.”

“I am proud to be a double alumnus (double Sycamore) of Indiana State University. Working in a high school affords me the opportunity to brag about ISU and encourage students to attend,” Swayne said. “I hope to return to begin my doctoral degree in the future — triple Sycamore. Go Sycamores!” 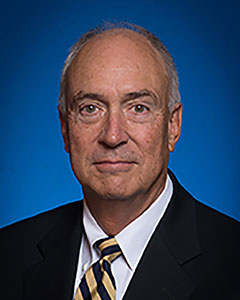 Jeff joined the ISU Foundation Board in 2012 and the ISU Board of Trustees two years later. He and his wife, Penny, a 1976 graduate of Indiana State, have three adult daughters living around the country.

"I was that typical Indiana first-generation college student, fortunate enough to have parents, who while not well-off, made college a priority," Taylor said. "ISU provided me a solid education, in and out of the classroom, which built a foundation for a successful career and family life. I am delighted to serve on the ISU Board of Trustees to lend my talents and efforts to ISU's continued success. I sincerely want others to realize the life-changing outcomes of an ISU degree experience."

Jeff was appointed chair of the Indiana State University Board of Trustees in July 2019. 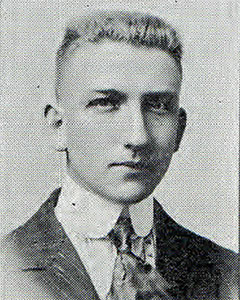 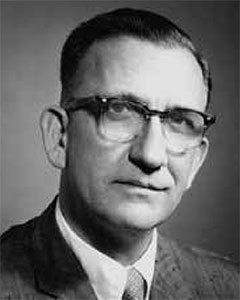 A graduate of Indiana State Normal School in 1920, Fitzhugh Traylor received the Distinguished Alumni Award in 1957 when they were first introduced. His devotion to the insurance profession and his service to his community contributed to his selection for this award. At the time he received the DAA he was president of the American Society of Charted Life Underwriters.

After leaving ISNS, Fitzhugh taught in a high school but in 1922, when not teaching, Fitzhugh started writing life insurance policies for the Equitable Life Insurance Society. In 1928, he was advanced to assistant manage and a year later was field instructor. In 1931, Fitzhugh was made manager of their Boston office. While in Boston he served as president of the Life Underwriters Association and in 1942 was made president of the Life Managers' Association. In 1943, Fitzhugh returned to Indiana as manager of all Equitable's Indiana agencies. Fitzhugh was also president of the Society of Financial Service Professionals (1956 - 57) and in 1959 was the recipient of the Jack Peckinpaugh Associate of the Year Award from the National Association of Insurance and Financial Advisors. 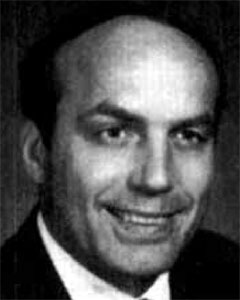 Dr. Ronald L. Vaughn earned his bachelors in 1968 and his masters in 1970. He was awarded the Distinguished Alumni Award in 1997. Vaughn earned distinction in the fields of marketing and higher education. When he received the award, he was president of the University of Tampa.

Ronald paid his way through bachelor and master's degree programs at Indiana State by working jobs including painting on weekends, selling Sarah Coventry jewelry, working at an A& W restaurant, being a lifeguard/swimming instructor in the summers, and working at Indiana State as a graduate assistant and research assistant for the Bureau of Business Research. He was initiated into Delta Sigma Pi's Delta Tau Chapter in 1967. After Indiana State, Ronald became a doctoral student at the University of Georgia.

While at the University of Georgia, Ronald and a partner created the American Recreational Equipment Co. (AMREC) providing travel trailer accessories like awnings, dining canopies, and drop-leaf tire carriers. The company took in about $250,000 in revenue during the two years. After graduating, Ronald became a business consultant in Peoria, Illinois, He later purchased Scotti Research, turning the company from $75,000 to a $1.5 million revenue. While doing that, Ronald worked in Bradley University's marketing program before joining the University of Tampa to start their Marketing Department. In 1989, Ronald became dean of their College of Business. In January 1995, he was named President of the university.

Whitman is a retired executive vice president of Exstream Software, LLC, ranked among the world's fastest growing technology companies and a leading provider of enterprise software that streamlines the creation and delivery of personalized documents and other communications materials. Exstream was purchased by Hewlett-Packard in 2008. At Exstream, Whitman was responsible for the company's distribution and channels internationally and for overseeing worldwide sales. With more than 25 years experience in software sales, Whitman has held senior management, sales management and product marketing positions with a variety of companies, including Xerox, Digital Equipment Corp., and First Data. Some of Exstream's major clients included Bank of America, Fidelity Investments and Xerox.