Four Indiana State University graduating seniors have been selected to receive the Hines Memorial Medal during winter commencement Saturday at noon in Hulman Center. Named for Linnaeus Hines, who served as Indiana State's fourth president from 1921 to 1933, the award recognizes the graduating student or students with the highest cumulative grade point average.

Among the four is Whitney Nicole O'Brien of Terre Haute, an accounting major, who plans to work for Dauby O'Connor and Zaleski, a public accounting firm, beginning at the end of December. O'Brien is the recipient of the President's Scholarship, Networks Scholarship and the Indiana CPA Society Scholarship.

At Indiana State, O'Brien was a member of the Alpha Kappa Psi business fraternity. A graduate of Terre Haute North Vigo High School, she is the daughter of Jerry and Penny O'Brien. 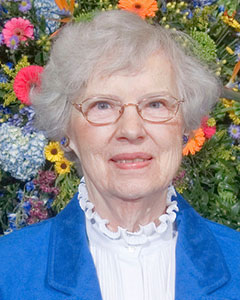 Jack Johnson and Lavelda Johnson Goble dedicated their professional lives to Indiana State University. Now, their devotion will continue in the form of a bequest to the university's first comprehensive fundraising campaign. The $700,000 gift will help provide financial support to students via "March On! The Campaign for Indiana State University." With the upcoming disbursement from Goble's estate, the value of scholarships set up in her name and that of her late husband will increase by eight times.

Goble worked in the university president's office from 1961 to 1987, during the tenure of Presidents Raleigh Holmstedt, Alan Rankin and Richard Landini. Johnson retired from the political science department faculty in 1982. The couple had great empathy for students and found their greatest pride in student accomplishments, according to those who knew them.

Brianna Henico, a sophomore business major, and 2010 accounting graduate Thomas Wilson are among Linton residents who have benefitted from the Lavelda Johnson Goble Scholarship.

The Johnson and Goble scholarships currently provide between $1,000 and $3,000 per year. Eventually the income from the two scholarship endowments could provide full-ride scholarships for the deserving students selected to receive them, said Joel Harbaugh, associate vice president for development with the foundation. 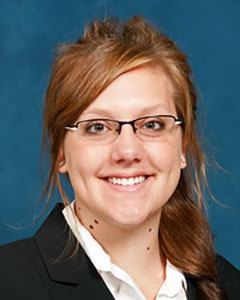 Lindsey Butorac, a sophomore management and marketing major from Bloomington, Ill., was among more than 110 applicants nominated for the scholarship from more than 60 chapters nationwide. She will receive $1,000 for the 2010-11 academic year.

In addition to serving as president of Indiana State's Alpha Lambda Delta chapter, Butorac has served as hall council president and as a resident assistant for Rhoads Hall. She is active in the University Honors Program, Alpha Kappa Psi business fraternity, where she is treasurer and mentor to pledges and is director of the sophomore special events team for the Networks Scholarship program.