Indiana State University was established by the Indiana General Assembly on December 20, 1865, as the Indiana State Normal School in Terre Haute. As the State Normal School, its core mission was to educate elementary and high school teachers. State funds amounting to $50,000 were appropriated to establish the school in an Indiana city that could match or exceed the State funding. The Board of the Normal School was authorized to advertise throughout the state of Indiana for donations of land, money and buildings as a site for the new school. Terre Haute was the only community in the state to make such an offer of money and land.

The original building was erected at a cost of $189,000, in the area on campus now known as the Quadrangle or Quad. The architects were Vrydagh & Son, of Terre Haute. Myles and Hedden were the contractors. The cornerstone was laid August 13, 1867. On January 6, 1870, the partially constructed and poorly equipped ISNS building was opened to students. On this day, President William Jones greeted 23 students and a faculty comprised of three assistants. Later in the year that student body increased to 40 and three additional faculty members were hired. 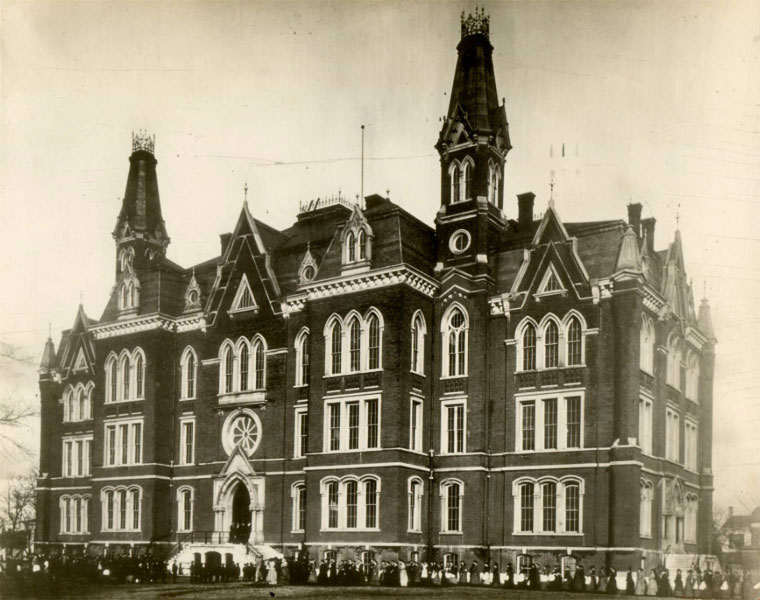 On April 8, 1888, the 18-year-old ISNS building was completely destroyed by fire. The event was described as “the most unfortunate single catastrophe that could happen to Terre Haute.”

Terre Haute gave another $50,000 for the immediate rebuilding of the school which was built on the foundaions of the old. This building, called “Old Main,” was designed by Jenny & Otis, of Chicago, Illinois. W. A. Atkins of Terre Haute, and Collins and Ohm were the contractors. Instruction resumed in the new Normal School building in the fall of 1888. The students only missed one day of classes. 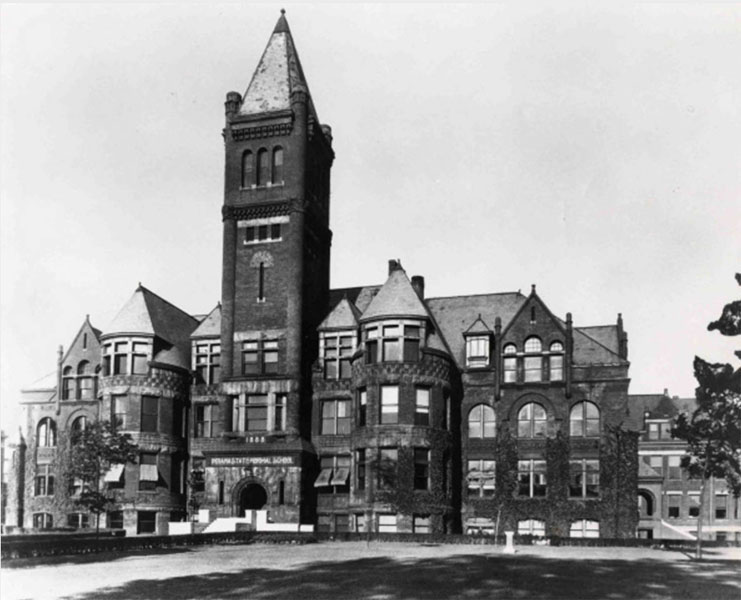 1918 -- Commerce Department formed by Indiana State Normal School. The department was located in Old Main and chaired by Shepherd Young who had joined the faculty that year as Professor of Commercial Subjects. Prior to joining the ISNS faculty, Mr. Young was a teacher and administrator in Kentucky, West Virginia, and Indiana schools. Mr. Young died, still with ISNS, in 1940.

1920 -- The entry for the commercial department in the 1920 edition of the Normal Advance yearbook (page 31) reads, "The courses are so organized that the whole curriculum of the course can be completed in one year. Courses in advanced bookkeeping, advanced and beginning shorthand and advanced typewriting are offered, the Gregg system of shorthand being used. The department occupies the entire fourth floor of the building and is equipped in the most modern way. The aim of the course is to produce efficient teachers of the commercial department in the high schools of the State. Incidentally, the department furnishes the students with a very practical course which will assist them towards well advanced business positions. The department is gaining so rapidly in popularity that another expansion of the quarters will soon be necessary."

Degrees with majors in commerce were awarded. The two graduates were Frank Grove and Robertine Wilson. Grove became assistant professor of commerce at ISNS in 1922.

1923 -- First undergraduate degrees in commerce awarded to Herman Boyle, who eventually retired as an executive of Standard Oil Company. The other recipients were Thelma Keller and Marie Rucker. Rucker became an assistant professor of commerce at ISNS in 1926.

1935 -- The federal building on Cherry Street opened to the public in 1935. This building was to become the home of the Scott College of Business in August, 2012. See our Artworks pages for more details.

1956 – Accounting Club formed​. The club was open to any student majoring in accounting and business administration who had completed one year of tweleve quarter hours in accounting and was an associate memeber of the American Accounting Association. The object of the club was to stimulate and promote further interest in the field of accounting. Technical sessions were held each month and social meetings once a quarter.

1959 – Beta Iota Sigma chapter formed. This organization was formed to meet the needs of students majoring in business on a non-teaching curriculum. ​In May of that year they created a petition and became the Delta Tau chapter of Delta Sigma Pi on October 10, 1959.

1966 -- NYSE begins a composite index of all listed common stocks. This is referred to as the "Common Stock Index" and is transmitted daily. The starting point of the index is 50. It is later renamed the NYSE Composite Index.

1968 -- Statesman Towers Erected. Designed by Ewing Miller and Associates and built by the F.A. Wilhelm Construction Company in 1968, Statesman Towers were dedicated on April 17, 1969. Named after former Vice Presidents of the United States they were originally student dormitories designated as Colfax, Fairbanks, Hendricks and Marshall Halls. The west building was converted to classrooms and faculty offices for the then School of Education in 1977 and the east in 1981 to house the School of Business. The Bayh College of Education moved into University Hall in 2009. The Scott College of Business moved into Federal Hall in 2012.

1968 -- The Indiana State University Marketing Club was organized in the spring of 1968 and in 1969 became an official chapter of the American Marketing Association. One of the main objectives of the club was to give students interested in careers in marketing, retailing, marketing management, advertising management and related fields information about what various positions in these fields are actually like. The club accomplished this by utilizing guest speakers, tours, films and attending A.M.A. Conferences.

1969 -- First MBA degrees awarded; facilities expanded by adding fourth floor to business building. Among the first to gain their MBA in 1970 were Paul Lo and Ronald Vaughn. Both also earned the Distinguished Alumni Award. Paul Lo and Ronald Vaughn who both earned their MBA in 1970. Both also went on earn the Distinuished Alumni Award. Paul Lo (’70 MBA) is an internationally recognized banker and financier, who, in 2008, retired as CEO, CFO and president of SinoPac Holdings and chairman of Bank SinoPac. Ron Vaughn (’68 BS, ’70 MBA) serves as president of the University of Tampa and has been at the helm there since 1984. Prior to 1969 scholars could earn a Master's Degree in Business.

1970 -- Accounting, Business, Distributive Education and Office Administration, Management-Finance, and Marketing made up the four departments of the School of Business. In conjunction with the annual Business Day, a new Honors Day Program which constituted personal recognition of honors awards within the school was held. The School of Business moved into its expanded quarters on the new fifth floor. The added facilities contain 25 faculty offices, 2 department offices, 15 graduate assistant’s offices and study units, and 3 seminar rooms separated by folding doors which open to provide a large assembly room.

1970 -- First Mortgage Based Security (MBS) brought to market in US by Ginnie Mae.

February 8, 1971 -- NASDAQ was founded in by the National Association of Securities Dealers (NASD). It was the world's first electronic stock market.

1979 –- Department of Education is established.

1980 -- Relocation to Statesman Towers on Sycamore between 8th and 9th streets.

1989 -- College of Business celebrates 25th anniversary; full re-accreditation granted. Dr. Herbert L. Ross was dean of the School of Business from 1989 to 1995.

February 20, 1990 -- The Alpha Epsilon Chapter of Gamma Iota Sigma is chartered at ISU.

January 1, 1995 -- World Trade Organization (WTO) is established as the successor to the General Agreement on Trade and Tariffs (GATT) to promote international trade through the elimination of trade barriers.

1998 -- The European Central Bank is established.

1999 -- Gongaware Center was established by a $5 million gift from Don and Pat Gongaware, to support executive development, student development and industry research in insurance and risk management.

2001 -- Formed by Dr. Tarek Zaher the club regularly competes in the annual Oak Associates Investment Contest. It was placed first in 2001 and received an award of $20,000. This success was followed by fifth- and sixth-place rankings in 2002 and 2003, respectively, and an additional award of $5,000. In 2005, the club won again with a 32 percent return on their investment with their portfolio growing to nearly $90,000. The Club also now organizes the annual Student Managed Investment Fund Consortium Conferences. Investment Club web site.

2002 -- Dr. Ronald F. Green became dean of the School of Business in 2002 and by 2007 when he retired, had seen the transformation to the College of Business

2006 -- MBA program listed as one of the best in the Princeton Review. It's been listed in every issue since.

April 10/11 2007 -- Mark Henderson, executive vice president and chief operating officer of Lockton Companies, LLC, was the first Leader in Action Series presenter for the Insurance and Risk Management Program and Gongaware Center. This speaker series grew out of financial services earning Program of National Distinction honors at ISU. Lockton is the world's largest privately held insurance broker and has hired many ISU student interns and graduates for full-time employment.

2007 -- ISU recognizes Financial Services as one of two Programs of National Distinction.

2009 -- ISU trustees approve renaming the college to the Scott College of Business. ISU trustees approve renaming college to the Scott College of Business. Don Scott was owner of Terre Haute's Sycamore Agency and then president of Old National Insurance for a total of more than 40 years, He also served on the Indiana State University Foundation board for 25 years. Their generous gift helped make possible the renovation of the Federal Hall for the college.

2010 -- University dedicates naming of the Scott College of Business

2011 -- First Whitman European Business Student Experience travels to Paris. Steve Whitman is a retired executive vice president of Exstream Software, LLC. Exstream was purchased by Hewlett-Packard in 2008. Whitman graduated from the Scott College of business in 1977 with a bachelor's degree in business administration. He launched The Whitman European Business Student Experience at ISU. The fund that he and his wife, Becky, started covers up to 90% of costs for 10 students and a faculty member per trip. The trips allow students to meet business contacts in a variety of European cities.

September 7, 2012 -- University dedicates Federal Hall as the new home for the Scott College of Business.

March 21, 2014 -- SCB Students Continue to Win. Indiana State University students toppled teams from Indiana and Ball State universities to capture their win in the National Association of Industrial and Office Properties University Challenge. The nine-member team of undergraduates from Ed Gallatin's real estate finance class received a winner's shovel and trophy that will be placed at Scott College of Business. The team also won $5,000, which Gallatin said will be seed money to start a new scholarship for students interested in real estate. See News Story

June 1026 - MBA in Education Leadership Program introduced. a unique program designed in partnership with Indiana State’s Scott College of Business and the Bayh College of Education’s Department of Educational Leadership along with support and leadership from the Woodrow Wilson National Fellowship Foundation. Blending clinical practice in schools with innovative business school coursework, the MBA in Education Leadership is designed to ensures graduates have the knowledge and skills not only to guide schools and districts in a changing education environment, but also close achievement gaps between America’s lowest- and highest-performing schools and between the country’s top-performing schools and those around the world.

April 2017 - Alumnus Todd Osburn and Caroline Howe made one of the largest individual gifts in Indiana State University history. Their $7.5 million planned gift, $5 million of which is for the Scott College of Business, is uniquely structured to both help the most financially strapped students and to ensure their professional readiness upon graduation.

June 1, 2019 - Dean Brien Smith departed the Scott College of Business after being offered the position of Provost Vice President for Academic Affairs at Youngstown State University in Ohio. Brien has bee ndean since 2012. Brien has led the Scott College of Business since 2012. During that time, he has created a new center to administer student success programs and oversee student career-readiness initiatives, expanded online programs, increased the number of women leaders in the college by 30 percent, and helped raise millions of dollars in gifts and earn more than $9 million in external grants for student programming and scholarships.
Jack Maynard became Interim Dean. Jack is currently the director of the MBA in Education Leadership program. Jack is no stranger to senior roles at Indiana State having served as dean of the college of education and provost and vice president for Academic Affairs (2003-2013).