Home » History » From the Yearbooks 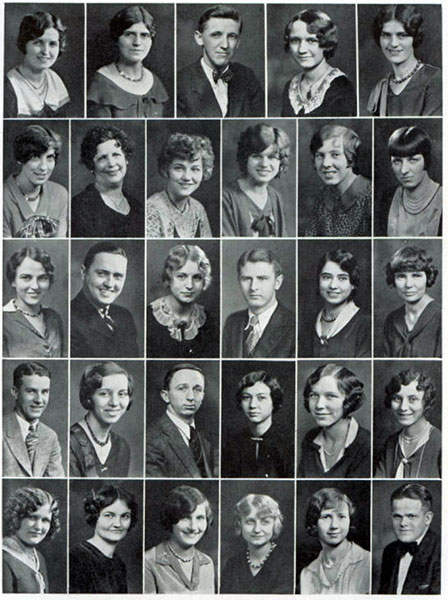 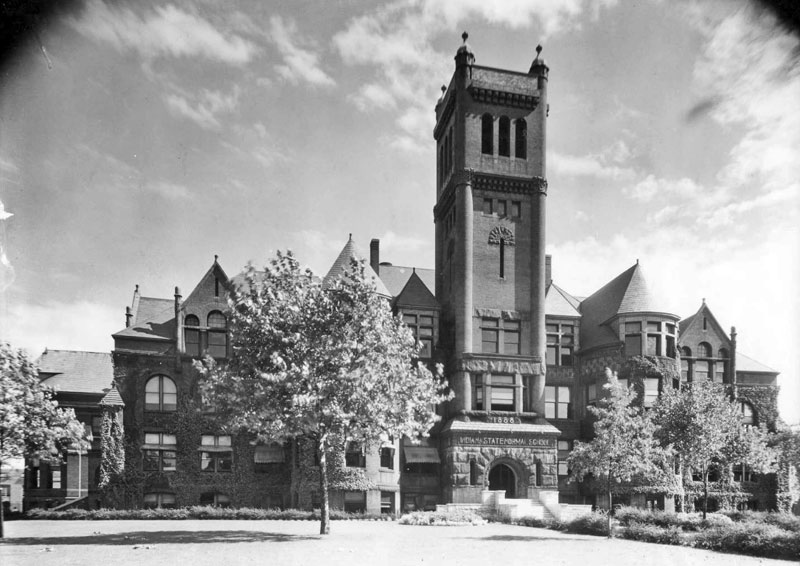 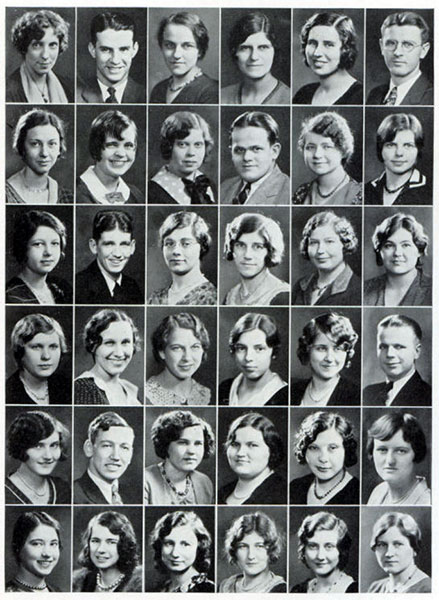 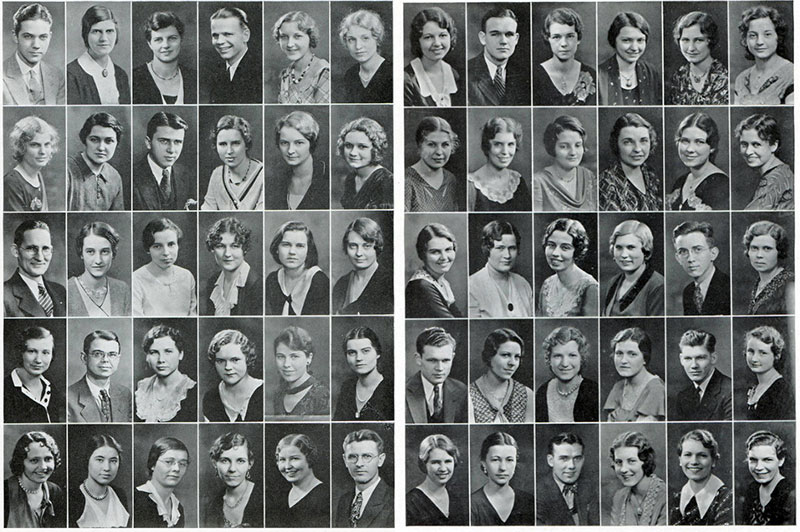 The image has been reaaranged slightly from the original. Rows 6 to 10 now appear to the right of rows 1 to 5 instead of underneath. 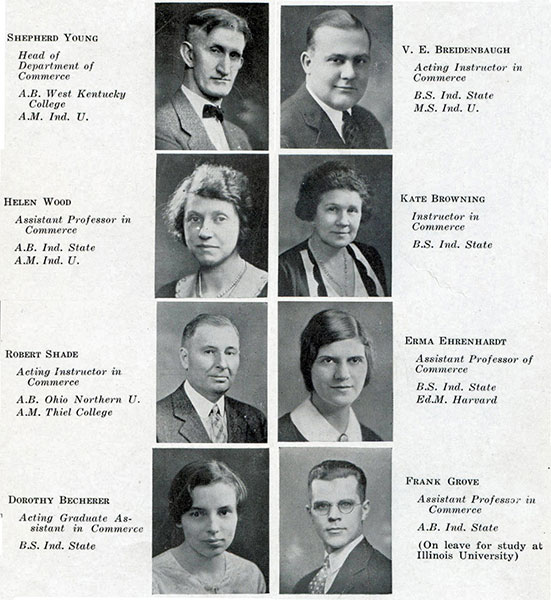 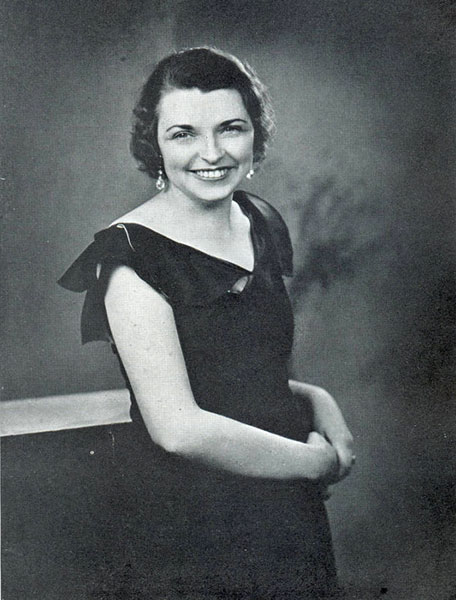 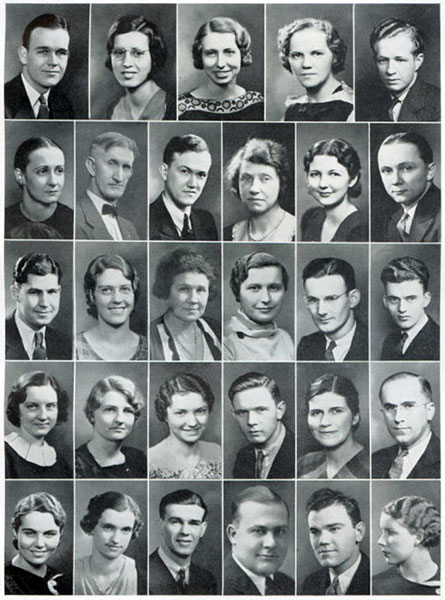 Unfortunately the captioning in the original is not correct. For example, Professor Shepherd Young is actually in the 2nd row, 2nd from the left, not 5th row, 4th from the left.

Outside the University: Federal Hall

The three-story Art Deco-style federal building was was funded as Public Work Project under the presidency of Franklin D. Roosevelt. Built in 1934 to the designs of Terre Haute-based architects Miller & Yeager for the cost of around $450,000. It was completed on December 1, 1934, and the building opened to the public in 1935. The building consists of a dressed limestone veneer over a steel I-beam frame, with a heavy foundation, basement and roof made of steel-reinforced concrete. The national emblem, the bald eagle, shows up in metal grillwork above the doors, and in detailing, such as the trim on the directory and bulletin board in the Cherry Street entry. Beneath the exterior windows are large metal plates, adorned with a single, centered torch. The facade, seen from Cherry Street, is divided into 11 narrow, two-story bays, separted by fluted piers.

It originally was the home of the post office, the Social Security Administration, the Federal Bureau of Investigation, the Internal Revenue Service and the federal court. The federal courtroom features a mural by Frederick Webb Ross titled "The Signing of the Magna Carta."

At the original dedication in 1935, John T. Beasley, president of the Terre Haute Chamber of Commerce spared no superlatives in his speech saying, "By a happy combination of mass and void, interplay of lights and shadows, proportion and balance, strength and delicacy, detail and ornamentation, the genius of the architects and the skill of the artisans have produced a fit structure for Terre Haute — the imperial city of the great Wabash Valley empire,”

Indiana Historical Society has a nice collection of photos of the building of Federal Hall taken by Martin's Phto Shop between 1933 and 1935.

The building was placed on the National Register of Historic Places in 1984. In 2007, the General Services Administration turned over the facility to Indiana State. Before doing so they carried our a $10 million partial restoration of the building. Almost all of the original art deco decoration were kept including making copies of the original light fittings, some of which had been replaced by fluorescent lamps in the 1950s. Following the total $30-million dollar, multi-year renovation; the building became the new home of the Indiana State University Scott College of Business. The first classes were held during the Fall 2012 semester. 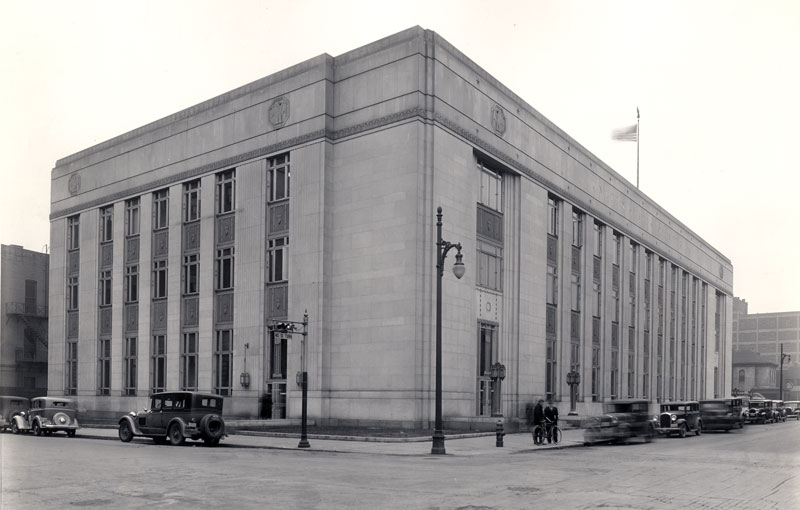 The purpose of the Commerce Club is to bring together the students and faculty of the Commerce Department, in order that they may discuss their problems and meet socially. At the regular meetings, which are held twice a month, speakers are often brought in to talk over business and matters of general interest. Films relating to business activities are shown, and student discussion on topics not included in the school curriculum is encouraged. The programs of the meetings are interesting and entertaining as well as educational.
The Commerce Club does not confine itself wholly to academic activities. Each term some kind of social affair, usually a dance or a party, is held.
This year’s officers were Harold K. Tolen, Joseph H. Young, Annabeth Chew, and Edwin Halstead. (1937 Sycamore, page 70) 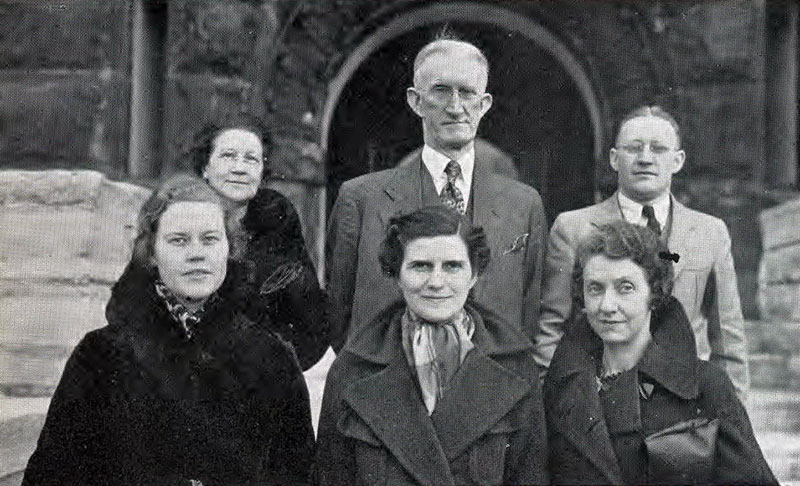 The Chi chapter of Pi Omega Pi was organized at Indiana State in 1932. This is a national organization for the purpose of furthering commercial education. Officers for the year were Ada Dierdorf, Isobel Heaton, Emma Jane Sabiston, Miriam Silverstein.
[Note: Emma Jane Gardner (nee Sabiston) was born February 24, 1916, in Terre Haute to George N. Sabiston and Emma L. Bryant Sabiston. She passed away on Wednesday, October 16, 2002, in Union Hospital, aged 86, and is buried in New Harmony Cemetery.]
[Note: Miriam Silverstein was born on August 30, 1915 in Terre Haute. She has five brothers and sisters and one of those, Ethel, became a professor at Indiana State Teachers College. Miriam married an Air Force captain, Bernard Rubinstein. They moved to Arlington, VA and worked at the Pentagon for many years. Bernard died in the 1980s. In the early 1970s, Miriam suffered a severe stroke or had a brain tumor and was severely physically incapacitated and confined to a wheel chair, but, she still maintained her mental capacities and would love to play Scrabble. Miriam passed away on April 22, 2001, aged 85, at Winchester, MA., and is buried in Arlington, VA.] 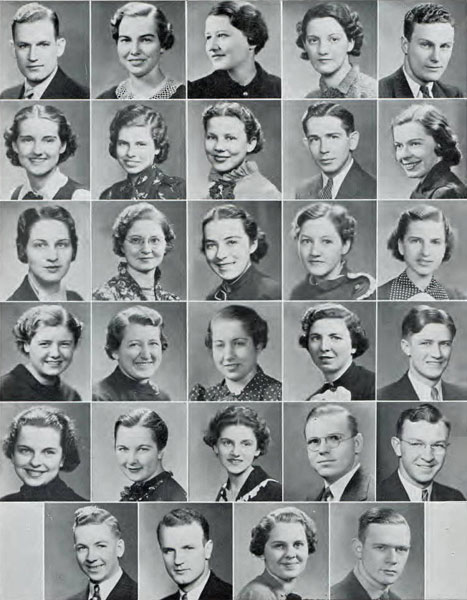 The purpose of the Commerce Club is to bring together the students and faculty of the commerce department to discuss problems of the prospective commercial teachers and to broaden their conception of business. Speakers, many of whom are business men, are brought to talk on business and matters of general interest to the commerce students. Social meetings are held once every term. In April the Commerce Club was active in planning the visiting teachers who were attending the clinic. 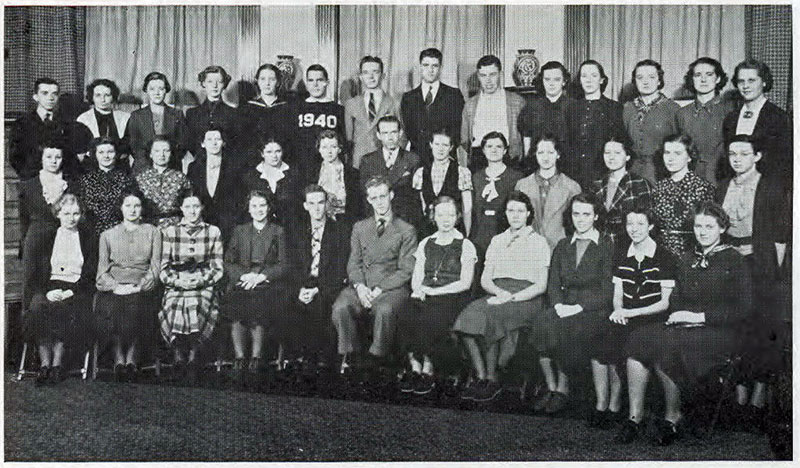 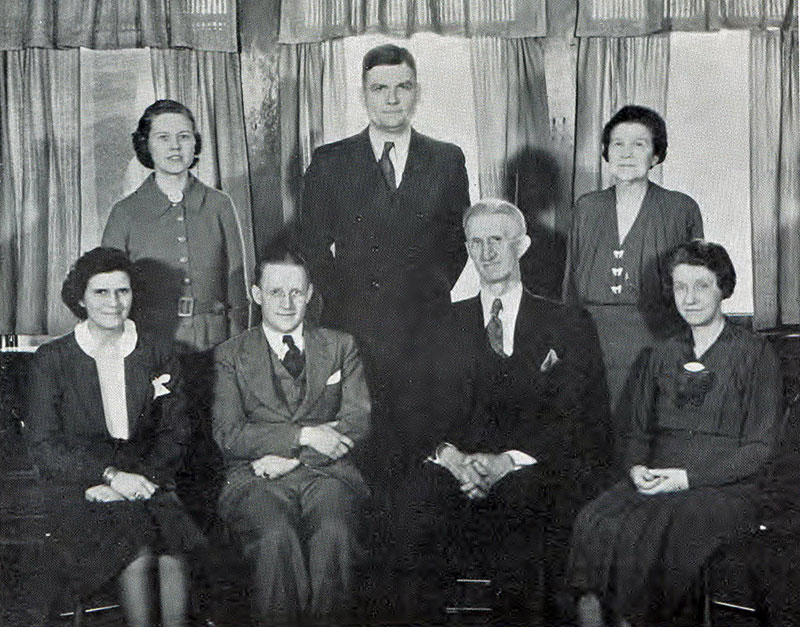 Prospective commercial teachers have an opportunity to broaden their views and to gain valuable information through the medium of the Commerce Club. The program committee this year provided outstanding speakers from the business and educational fields. Speakers from the faculty of Indiana State were Miss Irma Ehrenhardt, and dean J. Erle Grinnell.
In January a party was held in the Women’s Gymnasium, and under the chairmanship of Mary Conrad, dancing, games, and refreshments were enjoyed.
On April l8, the second annual Commercial Teachers Clinic as held. Principal William More of the John Hay school in Cleveland was the principal speaker. 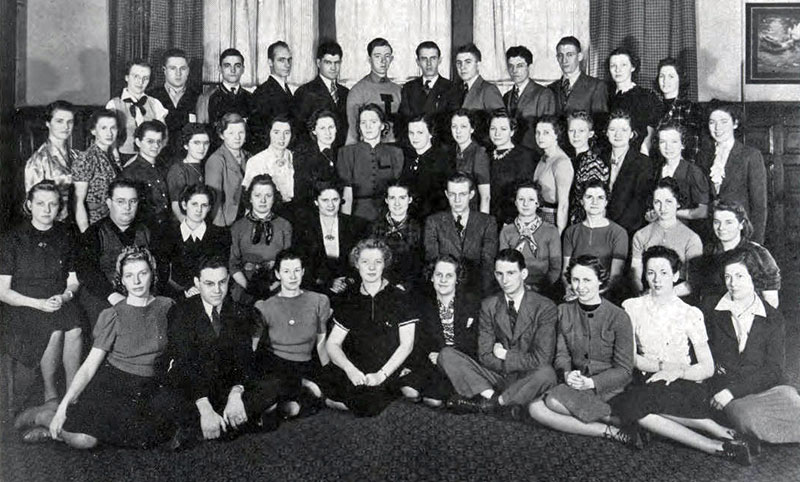