Lilly Endowment Inc. has awarded Networks Financial Institute at Indiana State University a $6 million grant. Officials say the funding will focus on programs including Scholar Professional Development, Financial Literacy and Research and Public Policy. In addition, most of the institute's operations will move to the ISU campus in the next two months.

The institute also plans a market assessment to determine future research and activities.

Assessing GLBA: Ten Years after the "Fall Of The Wall"

Ten years after the Berlin wall crumbled, ending the division between much of Eastern and Western Europe, the "regulatory wall" came down on the U.S. financial services industry. Nov. 12, 2009, will mark the 10-year anniversary of the signing of the Gramm-Leach-Bliley Act (GLBA) by President Clinton.

Widely regarded as the most significant piece of financial services regulation to be enacted since the Great Depression, the GLBA - also referred to as the Financial Modernization Act - broke down the barriers that separated cross-sector ownership of, and marketing between, banks, insurance companies, investment banks and securities firms.

Was the tearing down of financial regulatory walls a good thing for the U.S. insurance industry and other members of the financial sector? Did the deregulation facilitate competition and innovation as its authors intended? Networks Financial Institute at Indiana State University will present a conference regarding the Act's impact 10 years after its signing.

Just as the "fall of the wall" in Eastern Europe reflected decades of change on the continent and throughout the world, the enactment of the GLBA reflected decades of change and modernization in the U.S. financial services industry. The GLBA turned back some very restrictive regulatory policies that were enacted during the Great Depression, specifically portions of the Glass-Steagall Act of 1933, which prohibited a bank-holding company from owning other financial companies.

Christopher Whalen, co-founder and senior vice president of Institutional Risk Analytics, will be on the Indiana State University campus Tuesday to discuss the issues facing the financial services industry.

Whalen last visited the ISU campus in the spring of 2008, just before the United States began to experience its worst financial crisis in decades. During this visit, Whalen's address is titled "Restructuring, Resolving and Rebuilding: U.S. Banking 2010." He is expected to discuss the 2008 breakdown of the financial markets, examine where we are in this crisis and determine where the industry might be headed.

Personal Finance is not a new course in the Business curriculum. Business teachers have long believed that personal finance instruction is essential for our students. Through the many years that this course has been offered, it has been revised using classroom feedback, national and state organization resources (such as the National Business Education Association, Jump$tart Coalition for Personal Financial Literacy, and the Indiana State University Networks Financial Institute standards), and practicing professionals in the component areas of personal finance. The most recent revision was completed in April 2009.

TERRE HAUTE, Ind. - One of Indiana State University's finance professors spent the month of August at the Federal Reserve Bank in Chicago trying to learn more about how to reverse the country's troubled economy.

Lakshmi Balasubramanyan, an assistant professor of finance who began teaching at ISU in the fall of 2008, studied side by side with some of the greatest policy makers in the country, she said. For a scholar who focuses much of her research effort on commercial and retail banking, the experience was invaluable.

Balasubramanyan was there seeking answers about what's at the root of the country's financial difficulties. Back at ISU, she's continuing to study bank lending practices, small business borrowing practices and accessibility to credit, and all the while looking at government policies to see where disparities might be.

The Networks Financial Institute will be hosting a 5K Walk/Run on Wednesday, Oct. 14 to raise money for a local food bank.

As I write this, President Obama is preparing another fine-sounding, yet empty speech. His subject this time is financial reform. You may recall last week’s lofty address to the joint session of Congress, promoting his latest, somewhat-less-nebulous approach to healthcare reform. He assured the audience that the so-called "public option" (wherein a government-created entity competes with private sector healthcare insurers) would be an integral part of the plan. Within a week, two pieces of political toast from the Democratic Party (Nancy Pelosi and Harry Reid) set about undermining that aspect of the healthcare reform agenda. This is just one reason why, on November 2, 2010, the people who elected Democrats in 2006 and 2008 will be taking a "voters’ holiday", paving the way for Republican majorities in the Senate and House.

The Gramm-Leach-Bliley at Ten Conference will examine the intentions of the Act and evaluate its performance against the legislation's original objectives. 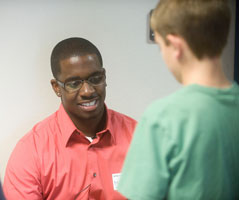 Cory Graham doesn't hesitate when asked to describe his 2009 thus far: "Fifth and final was the finest," he said with a grin.

He travelled to Washington D.C. in April to speak at the National Council of Teachers of Mathematics convention with Indiana State Associate Professor of Elementary Education Marylin Leinenbach. The two, along with other teammates, spoke about ISU's Student Mathematical AfteR-school Thinking (SMART) program in which college students teach elementary students about making wise financial decisions through ISU's Networks Financial Institute's Money Bus program. More than 19,000 people attend the national conference.

INDIANAPOLIS--(BUSINESS WIRE)--In today’s economic environment teaching kids about money, financial management and financial literacy has never been more important. More people will file for bankruptcy this year than will graduate college and U.S. consumers owe more than $970 billion in total debt and almost $9,000 per household in credit card debt.

A national survey of U.S. teens found that only 35 percent reported learning money management in school and more than 40 percent of parents believe that schools should be doing more to educate kids about money. Research conducted by Networks Financial Institute at Indiana State University indicates that 80 percent of K-12 teachers think it is important to teach financial literacy.

One of the architects of a pending federal insurance regulation bill defended the plan during an insurance policy forum as a way to deal with large insurance companies such as American International Group, Inc. (AIG). But other attendees at the sixth annual Insurance Reform Summit doubted that the proposed system would have done much good in the big insurer's case.

The paper is available as Policy Brief 2009-PB-03 from our publications pages.

The Networks Financial Institute at Indiana State University, Indianapolis, said among those scheduled to attend is U.S. Rep. Melissa Bean, D-Ill., who is a member of the House Financial Services Committee and Subcommittee on Capital Markets, Insurance and Government Sponsored Enterprises.

Rep. Melissa Bean, D-Ill., announced that she and Rep. Ed Royce, R-Calif., will co-sponsor a bill under the name of the National Insurance Modernization Act (NIMA) within several weeks, at the 2009 Insurance Reform Summit presented by Networks Financial Institute at Indiana State University on March 4, according to a Networks Financial Institute Press Release. Bean said that the new bill, a modified version of what was known as the National Insurance Act in the 109th and 110th Congress, is undergoing "fine tuning," as the sponsors finalize discussion on key elements, such as whether a federal charter would be optional or mandatory for insurers large enough to pose systemic risk to the financial services industry.

Bean previewed some of the bill's new measures, such as the state-by-state placement of a physical branch of a new regulator known as the Office of National Insurance (ONI). The bill also proposes a systemic risk regulator with authority to oversee insurance firms defined as "systemically important." Bean acknowledged that the concept of "systemic risk" remains undefined.