Meis, a department store chain, was founded in 1928, and was a thriving family business that grew to 10 stores across Indiana, Illinois and Kentucky. The flagship was adjacent to Indiana State’s campus and both customers and employees has strong connections with the University. A subsidiary of Meis developed a chain of 125 stores throughout the Midwest catering to young adults. The Bottom Half, as it was called, was greatly influenced by Indiana State students.

The Meis Stores were acquired by Elder-Beerman in 1989. The couple remains actively involved in many aspects of the University as well as the Terre Haute community. 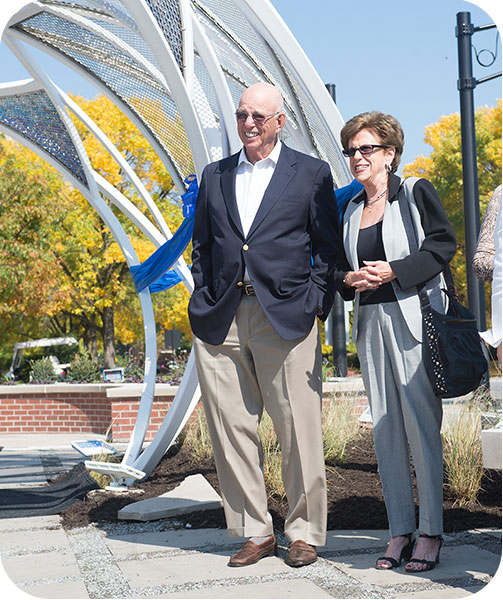 On October 4, 2012, the Indiana State University Foundation dedicated  Meis Plaza and the “Renewal” sycamore leaf sculpture. The plaza is located at the main entrance of the Foundation’s facility at Fifth and Cherry. The Alane and Lucien Meis Student Development Center (FD133) supports career development activities at Federal Hall, home of the Scott College of Business. Supporting the College of Business us important to the couple, because they are strong supporters of education in general, and for Lu, the business school in particular.