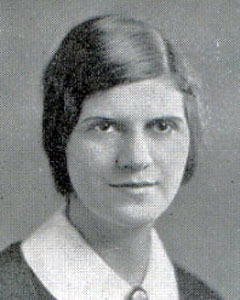 The Irma Ehrenhardt Scholarship was established by Mrs. Irma Ehrenhardt Vesser to recognize and assist outstanding ISU students preparing for careers in secretarial science and office administration. Mrs. Vesser earned the B.S. degree at Indiana State University in 1925 and the master's degree in education at Harvard University in 1929. She served on the ISU faculty for 12 years (1929-1941) and was a charter member of the ISU Chapters of Kappa Delta Pi and Pi Omega Pi. She was an official delegate of the NEA's Business Education Department to the International Congress of Business Education in Prague, Czechoslovakia, in 1935. She was voted one of the ten outstanding teachers of business education in 1939. Mrs. Vesser served on the Long Beach City College faculty for 26 years--from 1942 until her retirement in 1968. She died in November 1996.